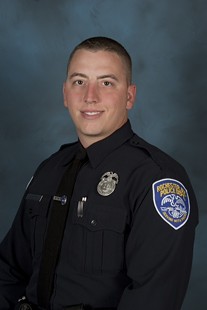 Rochester Police Chief Michael Ciminelli said Pierson and his partner, Officer Michael DiPaola, responded to help other officers look for a suspect who fled from a traffic stop. When they spotted a man matching the suspect's description, Pierson got out of the car and approached him. The suspect ran down Hudson Avenue and Pierson chased after, Ciminelli said. (The Rochester Police Department released this synopsis of the incident.)

The suspect, Johnson, allegedly fired two shots from a .25-caliber pistol; one struck Pierson and the other struck a bystander, according to Ciminelli.

Johnson is a convicted felon, which means it's illegal for him to possess a pistol in New York, Ciminelli said. Johnson has previously been convicted of violent crimes, and had an outstanding parole violation warrant at the time of the incident, Ciminelli said.

UPDATE, 12:10 p.m. — Officer Daryl Pierson, an eight-year veteran of the Rochester Police Department, was shot and killed last night during a pursuit on Hudson Avenue in the city. Pierson, 32, leaves behind a wife and two children, ages 3 months and 4 years old.


The shooting happened around 9:25 p.m. in the area of 955 Hudson, said Police Chief Mike Ciminelli during a press conference this morning.

The suspect in the shooting is Thomas Johnson, a parolee. Johnson was wounded when Pierson’s partner, a seven-year veteran of the force, returned fire, Ciminelli said. An innocent bystander was also wounded, he said.

Pierson was also a member of the Army National Guard. During his time with the RPD, he was recognized for his efforts in removing illegal firearms from the street, Ciminelli said. He also received a good conduct award and was an officer of the month.

“Our heart is heavy,” said Mike Mazzeo, president of the police union, during the press conference. “We’ve lost a brother. We’re a close-knit family and this is a difficult time for all of us.”

Mazzeo said that the department would “stand close together” as it tries to heal.

Rochester Mayor Lovely Warren had strong words for Pierson’s shooter and others who commit violence on the city’s streets. They will be held accountable, she said.

“We will not sit by and watch you wreak havoc on our city,” Warren said.

Warren said she wants to work with state officials to look at the issue of parolees returning to the city. And she said she wants a renewed emphasis on getting illegal guns off the streets. She said she’d work with the Rochester Police Department, Project Exile, and other groups on this effort.

The RPD will hold a press conference with the Monroe County District Attorney’s Office later today to share further details on the case.

A Rochester Police Officer was reportedly killed overnight in an exchange of gunfire. The officer has not yet been identified. The suspect, according to local media, is Thomas Johnson, a parolee.

Two others were also reportedly injured in the incident which occurred in the area of Hudson Avenue and Baumann Street in the city’s Northeast quadrant.

The unnamed officer is reportedly the first to be killed in the line of duty in Rochester in 55 years.

“The City Council would like to offer our sincere condolences to the family of the RPD officer that was killed this evening while on duty,” says Council President Loretta Scott in a statement. “Our community owes a debt of gratitude to this officer who ultimately gave his life protecting and serving our city.”

We ask that you keep the officer’s family, and the officers of the RPD in your thoughts and prayers as they, and our community as a whole, mourn this tragic loss,” Scott said.