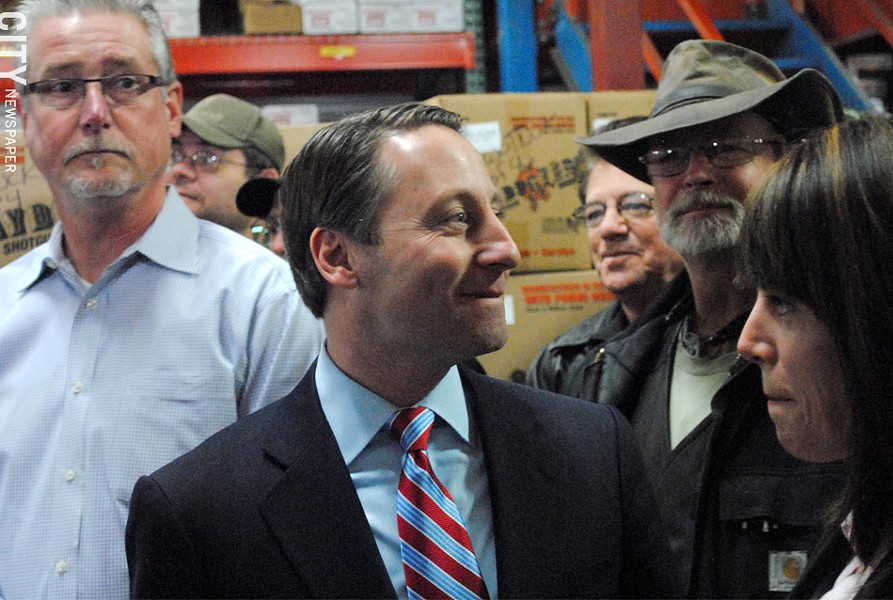 One of Republican Rob Astorino's gubernatorial campaign planks is the repeal of New York's new gun-control laws. So it makes a certain amount of sense that he'd hold an event at a gun shop.

Astorino, who is the Westchester County executive, announced his intention to run against Governor Andrew Cuomo yesterday. He made a campaign stop at Beikirch Ammunition Corporation in East Rochester today, speaking to a crowd big enough to pack the shop's warehouse area. His remarks played well with the anti-Cuomo group.

He led by saying that the SAFE act, the gun-control legislation that Cuomo pushed into law, has led to successful firearm-related companies like Beikirch and Remington expanding outside instead of inside the state. The approach Westchester County took, which focused on mental health issues, would have been a better solution, Astorino said.

"Why does Governor Cuomo respect prisoners more than he respects law-abiding citizens here in this room?" he said. (During his remarks, Astorino never directly mentioned Cuomo's proposal to give state inmates access to college degree programs.)

Astorino also said that the state's taxes are too high and that jobs and businesses are leaving New York. And he criticized the governor's START-UP NY proposal, which gives substantial tax breaks to certain businesses that locate near, and work with, SUNY campuses. Instead, the governor should focus on making taxes better "for everybody," he said.

And Astorino said that as Westchester county executive, he's been able to close a $166 million budget gap without raising taxes, and that businesses are returning to the county. But those sorts of claims, which are typical of candidates, are often scrutinized. So expect state Democrats to question those numbers.

Astorino hasn't been selected as the state Republican Party's gubernatorial candidate, and Donald Trump keeps threatening to seek the nomination. But Astorino does have some local support, including County Executive Maggie Brooks and Monroe County Conservative Party chair Tom Cook.

Brooks introduced Astorino at today's event. She highlighted his experience as a radio executive and, particularly, as a county executive. Astorino, like county executives across the state, has had to find ways to fund important local services while meeting unfunded state mandates.

"County executives understand the challenges because we face them daily," she said.