January 31, 2014
Rochester’s teachers are not to blame for the city’s current economic problems, said Randi Weingarten this morning during a stop at the Children’s School of Rochester. Weingarten is president of the American Federation of Teachers, which at 1.5 million members, is one of the largest organized labor groups in the country. 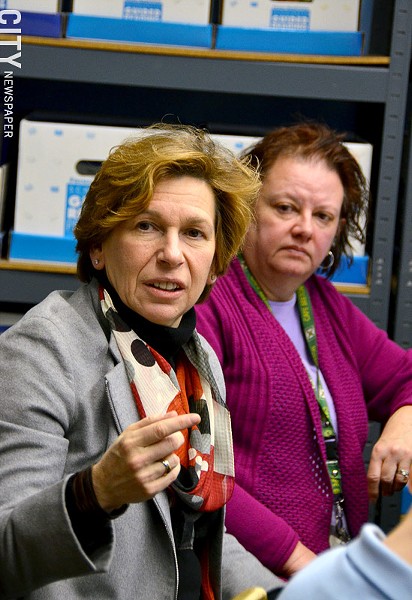 Weingarten arrived in Rochester yesterday to give a talk to area teachers and community leaders. And she’s touring some city schools today.

“Teachers are being blamed for Rochester being the fifth poorest city in the country,” she said. “Instead of blaming and scapegoating teachers, we need to support them. I’m hoping the new mayor [Lovely Warren] and the school board recognize this and will be more supportive.”

“Stop with the fixation on testing and fixate on the whole child,” she said.

Weingarten has spent considerable time visiting countries where students appear to be outperforming US students. The most important lessons from their success: improving teacher preparation, valuing education and learning, and focusing on equity, she said.

When the scores of urban schools are subtracted from some of the international tests used to evaluate student proficiency levels, students in the US have scored the same for the last decade. Weingarten said this shows that the problems in US education have more to do with extreme social-economic imbalances that education reform has failed to address.

Most of the countries she’s visited don’t use testing to evaluate teachers, she said; they prepare teachers thoroughly before leaving them alone in a classroom. The American Federation of Teachers advocates raising teacher education standards, she said, by adapting an education model that resembles medical school with teachers having to pass a longer clinical internship.

Weingarten is critical of the current education reform measures, which she said emphasize austerity, de-professionalizing teaching, and privatization of public schools.