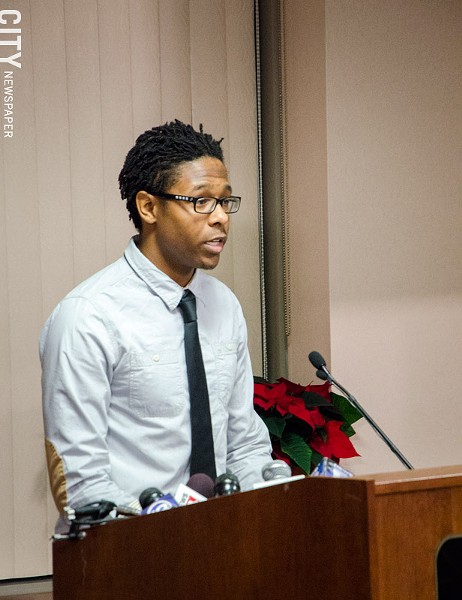 For  the last two months, State Education Commissioner John King has been on what officials call a “listening tour” in communities around the state. King heard mostly complaints from parents, teachers, and  students about the rocky roll out of the Common Core curriculum, high-stakes testing fatigue, and what they call unfair teacher evaluations.

King has tried to persuade the public and editorial boards that staying the course will lead to much-needed  improvements in student achievement. But it’s hard to tell if his tour  has  changed many minds.

Earlier th is week, it was the educators’ turn. In a national day of  action in cities across the country, teachers, parents, and students rallied against the key components of reform. More than 100 organizations in New York State alone participated.

At a rally at the Rochester NYSUT office, about a dozen speakers asked supporters to contact New York’s law makers, Board of Regents, and Commissioner King to demand that implementation of the Common Core be dramatically slowed. They want a three-year moratorium on high-stakes testing linked to teacher evaluations, as well as a $1.2 billion increase in education funding.

In some respects, King’s tour and the rallies reflect a widening gulf between education reformers and organized labor. But that’s an overly simplistic view, since more parents are beginning to question the efficacy and need for some of these reforms while some of the most pragmatic solutions are ignored.

Some speakers, for example, brought up the Campaign for Fiscal Equity lawsuit in which a judge ruled in 2001 that the state would increase education funding by $5.6 billion to do basic things like lower classroom sizes. Despite the court order, much of the money was never dispersed.

About the only thing everyone agrees with is that many urban students in particular are not prepared for careers or college after high school. But the reasons why and what to do about it vary widely.

The rallies were an opportunity to push back on months of what many teachers see as a relentless attack on the profession, political scapegoating, and an unwillingness by some to see the problems in public education in their entirety.

One young RIT freshman described himself as “one of the 9 percent of black males who graduate from city schools.” But he defended his teachers as are doing their best with what they have.

“You can’t learn from a book when you have to share it with two to three other students,” he said.

The attacks aren’t limited to K-12, some of the speakers said.

For instance, Jim Bearden, a professor emeritus at SUNY Geneseo, spoke about a $1.2 billion cut in SUNY funding as enrollment in one of the area’s premiere teaching preparation colleges skyrocketed. The result is fewer full-time professors and a greater reliance on adjunct instructors and online programs, he said. And he condemned the shift of the financial burden to SUNY students who often come from lower income families.