August 29, 2013
About 60 people carrying signs with slogans like "Keep Politics Away From Our Kids" and "Life Is Not a Test" protested outside School of the Arts yesterday. The protesters, most being teachers and parents of students in Rochester city schools, were rallying to send a message to State Education Commissioner John King, who was in Rochester. 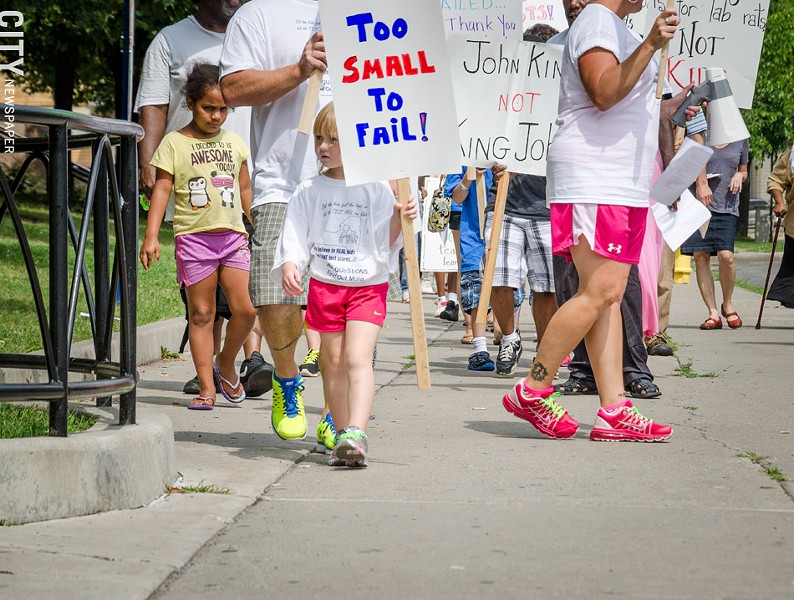 Much of the protesters' concerns are about the statewide launch of a rigorous new curriculum called Common Core. High-stakes testing has been an issue since former President George W. Bush passed No Child Left Behind.

But the Common Core is even more reliant on testing, many teachers at the protest said, and they said that the testing began before teachers were fully trained on the new curriculum. The results of the most recent state exams, which showed a dramatic drop in reading and math proficiency in districts across the state, alarmed many parents and educators.

Many parents, including parents in Rochester, did not allow their children to take the tests and some of the protesters vowed yesterday that they would continue to do so.

King has tried to calm anxieties about the test results, saying that students, parents, and teachers will eventually adjust to the higher standards, which, he says, are necessary for US students and workers to be competitive in a global economy.

King has also said that the most recent test results will not be used against teachers on their professional evaluations.