At roughly the same time yesterday that President Obama was swinging through Upstate New York to talk about education, a group of Rochester's African-American ministers were having their own press event about problems within the city school district.

Nearly a dozen ministers from the Baptist Ministers' Alliance and the Rochester Ministers' at Large aired their concerns about schools' Superintendent Bolgen Vargas's plan to have 20 schools open in the fall with longer days. Many parents in their congregations say that they were never notified about their children's scheduling changes until about two weeks ago, the ministers said. And in many cases, the changes create hardships for parents.
The Rev. Willie Harvey said the district has a long history of making decisions without involving parents. (The district confirmed that parents of students in some schools weren't given much advance notice.)

But then the ministers shifted sharply to an impromptu round-table discussion about a topic that is almost never talked about with frankness and candor: the responsibility that parents and their children have in education and college readiness.

While Harvey said that the district has a 30-year history of not educating its students or preparing them for college or a career, Bishop Jerry McCullough and several other ministers were not as quick to blame the city school district for low student performance.
"I don't blame the teachers," he said. "The teachers are not there to raise your kids. Educating your kids begins at home." 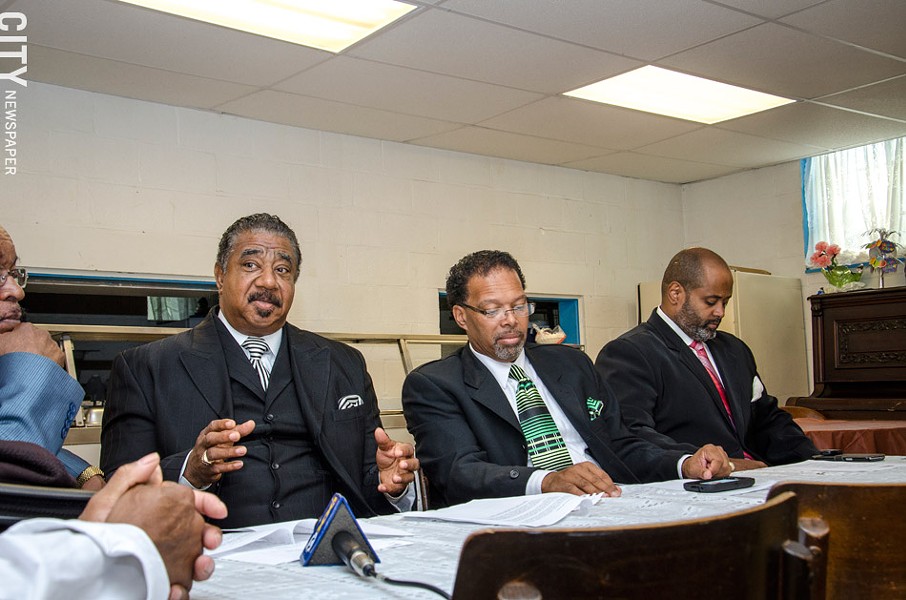 Several of the ministers talked about the frequent student behavioral problems they've seen in some city schools, and how teachers struggle daily with classroom management and discipline issues. And they sounded off on themes that have become familiar in the African-American community: the media's glamorization of the gangster lifestyle, teen pregnancies, and single mothers with limited educations raising multiple children.

The ministers agreed on several possible strategies. Many of the ministers' churches already have after-school study programs and parenting classes, which the ministers would like to expand. But funding the programs is difficult, they said.

Some of the ministers visit schools on their own, and teachers and principles seek their help with mentoring students. But the ministers also discussed forming a group of faith-based mentors to adopt schools and visit them weekly.

And they said that the district needs to hire more male teachers of color. There needs to be a strong black male presence in all city schools, they said.

Too many students are getting away with disruptive behavior because they can, the ministers said. Many teachers and administrators are afraid of them, the ministers said, so no one is being firm with them when they're getting into trouble. No one is telling them that they need to take more responsibility for their own futures, they said.

"We got to go in there and lay it on the line for them," McCullough said.