When it comes to bike-oriented cities, Portland, Oregon, is the community that usually comes to mind. And rightfully so: citywide, cyclists make 6 percent of all vehicular trips. That sounds small, but it's not. In the Rochester region, that number was about 1.1 percent in 2011, according to a survey by the Genesee Transportation Council. 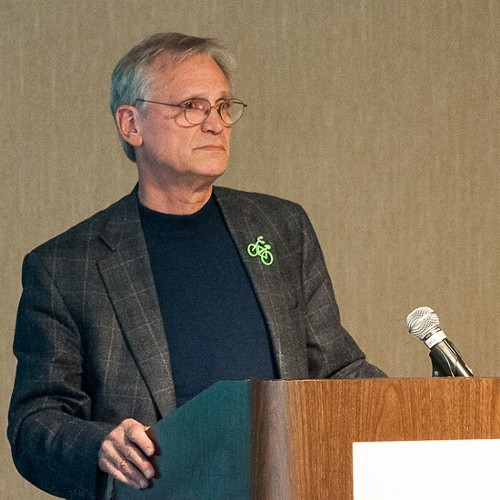 It took years of effort, careful planning, and education to get Portland where it is. And city officials' goal is to increase bicycle trips to 25 percent of all vehicular travels by 2030. (The city's bicycle counts page is available here.)

House Representative Earl Blumenauer, whose Congressional district includes Portland, says that if his city can become a bicycling mecca, so can Rochester. And Rochester's path to a more bikeable city may look something like Portland's. Blumenauer says his city's efforts began 20 years ago with a bicycle master plan and since that time, the number of people cycling has quadrupled. Blumenauer was Portland's commissioner of public works at the time.

Rochester completed its first bicycle master plan in January 2011, and it's been fairly aggressive in implementation. The effort helped the city earn recognition from the League of American Bicyclists as a bronze-level Bicycle Friendly Community.

The Rochester area also has a core of highly engaged cycling and active transportation advocates. In fact, Blumenauer spoke this morning at the Genesee-Finger Lakes Active Transportation Summit (GFLATS for short), which was organized by a coalition of transportation, advocacy, and health groups.

But much of his address centered on the "why." Across the country, most trips are made by automobiles carrying a single person. And there are costs associated with that, whether it's time spent on congested roads, money spent repairing roads, or money spent repairing vehicles damaged caused by worn roads, Blumenauer said.

Portland has built 300 miles of bicycle trails and lanes for the cost of building one mile of urban freeway, he said. And people in the city drive 20 percent less than the national average, which saves the typical family $2,500 a year, he said.

The root of the problem is that people in urban areas don't have the transportation choices that they used to, he said. He pointed out that Rochester once had a streetcar network.

"We have sentenced [residents] to burn a gallon of gas to buy a gallon of milk," he told the crowd.

And people across the country are starting to understand the value of "a trip not taken" by automobile, he said. That's particularly true of younger people, who choose where they live based on quality of life factors, including bikeability and walkability, he said.