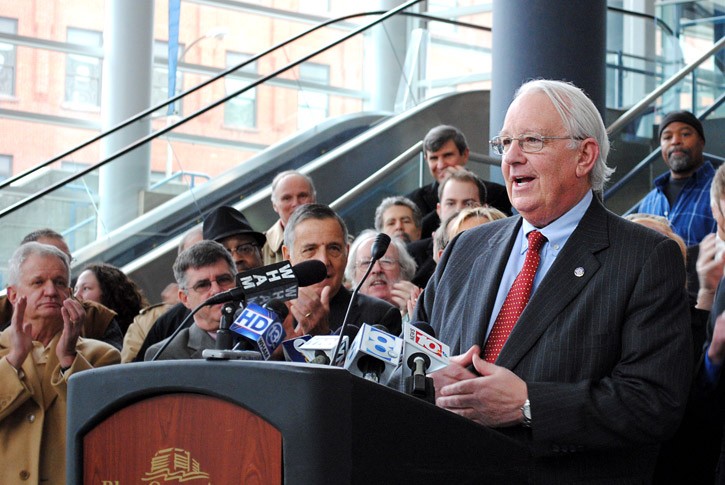 Rochester City Council will decide on Tuesday night whether it’s willing to chip in $15,000 for a new, cooperative truancy effort with the Rochester school district and the United Way.

The measure faced a rough ride through Council’s Public Safety Committee last week — the last stop before a vote of the full Council. The school district’s history of low performance and failed programs clearly worked against it. The committee did ultimately approve the legislation, which has the support of Mayor Tom Richards. Richards said during the committee meeting that the legislation is an honest effort by the school district to get a grip on its chronic truancy problem. The city can’t just sit back and criticize, he said: it has to try to help.

Pittsford Village trustees will discuss a proposed development for 75 Monroe Avenue when they meet Tuesday night.

A Mark IV subsidiary wants to develop the former Monoco Oil site into an upscale apartment complex and restaurant. The 75 Monroe Avenue site is located along the Erie Canal at the village’s edge. The developers are pursuing permits and site plan approval.

Mayor Bob Corby says there’s no definite schedule for when the board will vote. The Village Board members still have concerns about the scale and mass of the project, as proposed, as well as building heights.

“The project needs to have a scale that’s appropriate to the village of Pittsford,” Corby says.

Village Board members will discuss their concerns during the meeting; an agenda posted on the village’s website says that discussion should start at 8:30 p.m. The board previously closed its public hearing on the project, though the board does have an item on the agenda for general public comments later in the meeting. The meeting itself begins at 6:30 p.m. Jeremy Moule

By Thursday, County Executive Maggie Brooks must present her budget proposal to the County Legislature. County law sets a deadline of November 15, but there’s a chance Brooks will release her proposal before then maybe as early as tomorrow. Legislators typically receive copies of the next month’s proposed legislation at their previous month’s full meeting, and this month’s meeting is this Tuesday at 6 p.m.

The county’s current budget projects a $48.1 million deficit heading into 2013, which the administration says is due to mandated services. The county budget hovers around $1 billion, and odds are good that Brooks will keep the property tax rate at $8.99 per $1,000 of assessed value. The question is how she’ll do that and bridge a deficit. Jeremy Moule

Rochester schools Superintendent Bolgen Vargas will hold two of his “Conversations and Coffee” meetings this week: Tuesday, November 13, from 7 to 9 a.m., and Wednesday, November 14, from 5 to 7 p.m.

The meetings are open to the public and Vargas typically answers questions on almost any topic, although this week he is expected to talk about the draft master plan for the district’s buildings. The plan recommends closing as many as five city schools. Both meetings will be held at the district’s central office at 131 West Broad Street in the third floor conference room.

The Rochester school board will hold its monthly meeting on Thursday, November 15, at 6:30 p.m. at the district’s central office. The meeting is being held a week early this month because of Thanksgiving. So far the agenda includes only routine items such as tenure approval. Tim Louis Macaluso