April 17, 2020
With an unpredictable future looming precariously before them, Rochester-area club owners have been caught in a kind of COVID-19 limbo. In this ongoing series of The F-Word, Frank De Blase finds out how businesses that rely on a regular live audience are staying afloat. 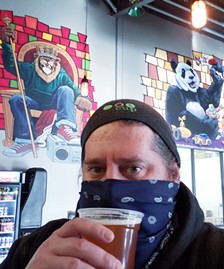 It’s hard to keep smiling during this pandemic, but you can see the corners of Three Heads Brewing concert organizer Geoff Dale’s mouth curl up into a grin when he talks about the things he loves: beer and the Rochester music scene. And he’s taken a hit in both categories.

Three Heads is still functioning, but at a reduced capacity. Less beer is being brewed — about half the batches produced pre-COVID-19 — and the stage is silent. The tasting room at 186 Atlantic Avenue is open only for "to go" sales of growlers and cans. Last week, the brewery began making its wares available via GrubHub.

Dale says it’s difficult to see friends struggling and being unable to help. “The worst thing about this situation is all the unknowns,” he wonders aloud. “When will we be open again? When can we bring our staff back? When can we do shows? It is just a weird holding pattern and I have no answers for our crew and friends.” He adds that Three Heads Brewing has furloughed 19 of its 28 employees.

But Dale says the brewery was never at risk of closing the doors for good because the state government has deemed it an “essential” business. “The real concern was how to manage the money we need to pay for rent and taxes while taking in significantly less money,” he says. Three Heads Brewing did get some much appreciated aid from the federal government.

Despite the severe financial belt-tightening, he does have an answer when asked what he plans on doing when the pandemic loosens its grip and people come back out. “I think we will get back to normal,” he says. “It will take time. But there will be music on our stage, and I'll be in the front row holding my beer in the air, singing along.”