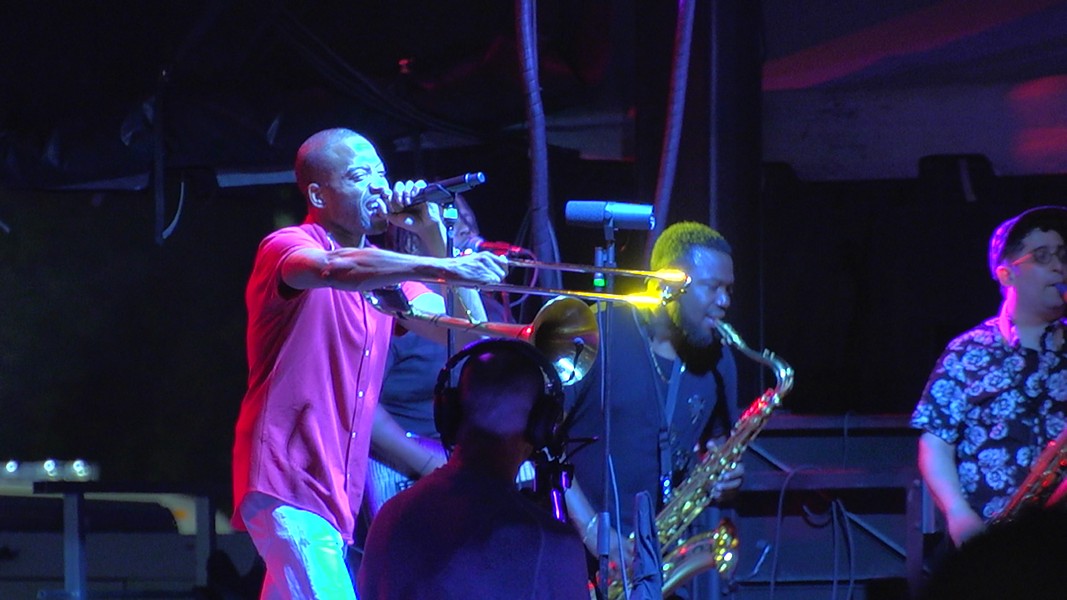 With a blast of Trombone Shorty’s horn, the Rochester International Jazz Festival roared to a satisfying close of Saturday night.

Responding to a final day of gorgeous weather over its nine days, the fest drew an estimated 208,000 people, pretty much matching last year’s total.

This was only the second time in its 18-year history that the fest escaped rain. The only other time that happened was in 2007. So the gods were with us. “I made a few phone calls,” festival co-producer John Nugent said.

Both Nugent and co-producer Marc Iacona released statements that this was the best-received year in the history of the event. Nugent referred to patrons “transported to the heights of musical ecstasy,” while Iacona added, “The artists have expressed their appreciation for how knowledgeable and musical our Rochester community is.”

The dates for next year’s fest were also announced: June 19 through June 27.

The substantial changes at this year’s festival will have to be evaluated, given the larger footprint of the event. For the first time, it included Geva Theatre Center’s two excellent stages, and the use of Parcel 5 off of East Main Street on all nine days. Patrons seem to be unanimous in missing the longtime festival venue Harro East Ballroom, which along with Anthology dropped out this year after disputes with the jazz fest promoters.
The shuttle bus did not seem to be used much, but perhaps a simplified route – Geva to Parcel 5 to Gibbs Street, then back – would more easily accommodate patrons as they exit the Geva shows. That’s if Parcel 5 is even available next year, as real estate tycoons vie for the gravel lot.

Otherwise, it was once again a well-run festival, despite early-day confusion at Geva – four shows one after another seemed to tax the logistics – and an act of God in the basement of the building where The Montage Music Hall sits, with a broken water main disrupting the electricity to the stage and cutting short a set by the Ghanaian drummer Paa Kow and his band.

Not a night for ballads

Without the East Avenue and Chestnut Street Stage this second weekend – the Downchild Blues Band with Dan Aykroyd and Southside Johnny and the Asbury Jukes jammed the intersection during the first weekend – the fest was left with a curious donut hole of inactivity between the closed-off sections of Gibbs and East Main Street. But Trombone Shorty & Orleans Avenue could clearly be heard over the entire downtown landscape, echoing along the architectural corridors. A powerful mix of New Orleans sound and hip-hop, Troy Andrews – that’s Trombone Shorty’s real name – pointed to the sky with his trombone, which bleated like an elephant on the opening “I Just Want My Heart Back.” This was not a night for ballads. It was a horn party, and the taps on the beer trucks were foaming over.
The crowd filled Parcel 5 for the free show, with minor evidence drifting through the air that some citizens were rehearsing for New York state’s future legalization of cannabis.

Drinking in the house band

Kansas Smitty’s House Band has solved the dilemma of how musicians can guarantee themselves a busy schedule of club gigs. Own your own bar, and book your own band. So it is with this London-based outfit, a seven-piece band on its first tour of America.

And the diverse menu of tunes flowed, starting with a swinging “Twentieth Century,” with the three-piece sax-and-trumpet section setting down their instruments midway through to lead Kilbourn Hall in rhythmic hand-clapping. Drink recommendation: beer.

“Take Me Home,” with its New Orleans-flavored opening, featured trumpeter Pete Horsfall handling the only vocals of the set (drink recommendation: single-malt scotch, accompanied by a cigar). And by then, it was time to call an Uber.

I don’t dare list my favorite shows of the festival. Many people I spoke with over the nine days saw more shows than I did, which makes them better authorities. Acts that I missed, but were repeatedly raved about by people I encountered: Jake Shimabukuro and his ukulele; guitarist Gilad Hekselman; folk group Over the Rhine; Stefon Harris and Blackout; mad percussionist Cyro Baptista; looping bassist Adam Ben Ezra; pianist Harold Mabern joining saxophonist George Coleman for an extra-long set at Kilbourn Hall; Kandace Springs with her rendition of “The First Time Ever I Saw Your Face”; Ron Artis II & the Truth; Matthew Whitaker, the 18-year-old pianist at The Montage.

But here are some of my best moments, day by day:

Day One: Drummer Steve Gadd and his son Duke engaging in a percussion duet in Kodak Hall at Eastman Theatre as the rest of the band stepped aside to watch.

Day Two: The Bill Frisell Trio at Temple Building Theater. The elegant guitarist opened his second set with an uninterrupted, 55-minute medley. After a moment’s pause, the trio went right back to work. Another 25-minute, uninterrupted medley.

Day Three: Rochester’s amazing sacred steel group, the Campbell Brothers, revealed they’re recording a version of Bruce Springsteen’s “We Take Care of Our Own,” for a Philadelphia group assembling a benefit for veterans and first responders.

Day Four: Enemy playing Christ Church. Ominous, then beauty. A challenging trio that understood what it had just put its audience through. Bassist Frans Petter Eldh went to the microphone before the final song and admitted that this arrhythmia was not for everyone: “Thanks for understanding.”

Day Five: VickiKristinaBarcelona’s Tom Waits tribute, with its gorgeous, cinematic arrangements. “We all have our films that we see,” said percussionist Amanda Homi.

Day Six: At Geva Theatre Center’s Fielding Stage, singer-songwriter Vilray marveling at the film “Casablanca,” and “how many scenes are in a bar where everyone is singing.” Then he got some audience participation – Vilray sang “I’m not ready,” and the audience responded with “He’s not ready” – and damn if it didn’t sound like a “Casablanca” outtake.

Day Seven: Best line of the fest, from Amanda Anne Platt & the Honeycutters at Geva’s Fielding Stage: “Learning to love the crooked hands that built me.”

Day Seven again, I get a second choice because this was my favorite night: David Helbock’s Random/ Control. The Austrian pianist does nothing right. This was the first time I’ve ever seen three guys playing the piano, and only one of them was touching the keys. Reed player Johannes Bär had his arms in the guts of the piano, fussing with the strings, and horn player Andreas Broger was tapping away on the lid and body with a drumstick and brush. This was the performance that had the most people insisting to me was the best show of the fest.

Day Eight: Catherine Russell mining vintage songs of the 1920’s, 30’s and 40’s. “You can’t pull the wool over my eyes,” she sang. “You can’t get away with telling those lies like that.” The audience at the Temple Building Theater roared and applauded with approval when it recognized what she meant when she said how that 1936 theme applied to today.

Today, Jeff is looking forward to mowing the lawn.