Veronica Swift was swift, if you get my drift. She positively slayed the joint with lightning speed and lightning lingual dexterity. In other words: she’s fast. If I could sing or talk that fast I’d certainly win more arguments at home (please, don’t tell my wife).

Swift was backed up by the sensational Emmet Cohen Trio, whose drummer maintained a Hollywood smile and cool demeanor while beating the hell out of his drums like an octopus with jock itch. Swift gave plenty of opportunities for all on stage to shine out, but the stage ultimately belonged to her. Her scat singing so blindingly fast, it was as if the audience had to hold onto wigs or hats or each other so as not to get blown out the door. World-class stuff, I’m telling you. 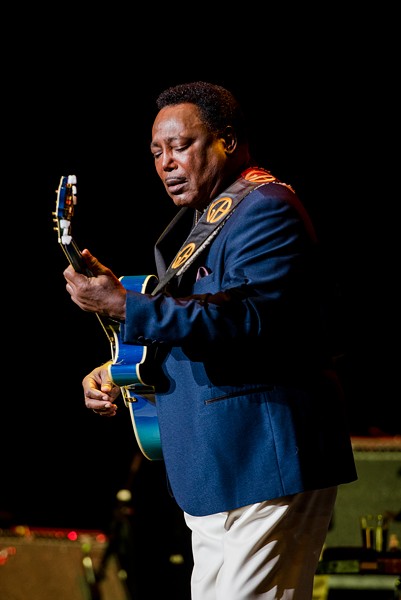 George Benson packed Kodak Hall all the way to the chandelier last night. I was excited to hear him play because his new album, “Walking to New Orleans,” is chock-full of Chuck Berry and Fats Domino. “Alright,” I told myself. “Some shit I can truck with.”

He did one song off the new album. One. It was the title track, which he played well, with a lot of his trademark jazz-tinged soul and R&B. There were, of course, the hits: “Turn Your Love Around,” “Give Me the Night,” “On Broadway,” and so on. The late Glenn Campbell’s number “Wichita Lineman” was a thoughtful surprise.

Benson’s guitar tone and style are an ample sample of bigness, and you can recognize it after just a few bars: “Hey, that’s George Benson playing there.” He wrung heavy-duty joy and sweat from all who stood at their seats, howling for two encores.

Tomorrow night, I’ll be heading to hear Suitcase Junket at the City of Rochester Midtown Stage at 7 p.m. Then I’ll be hanging with Marty Stuart and the Steve Miller Band at Kodak Hall at 8 p.m.

I’ll keep writing about it as long as it keeps going on...I’m tired, ya’ll.