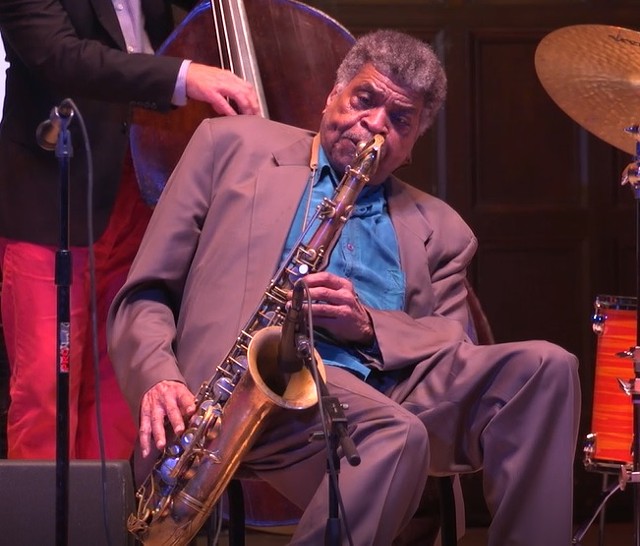 Night of the giants

John Nugent, the CGI Rochester International Jazz Festival’s artistic director, typically introduces the Kilbourn Hall concerts, but this time he came out with a saxophone. Nugent choked up as he described hearing George Coleman’s solo on “Stella by Starlight” on a Miles Davis album while he was a student at West Texas State University. “And it changed my life,” Nugent said.

George Coleman and his quartet got off to a rousing start Thursday evening, with Nugent harmonizing with Coleman on Gene Ammons and Sonny Stitt’s classic, “Blues Up and Down.”

Coleman and Nugent each played lengthy, adventurous solos, ably backed by the great Harold Mabern on piano, Joe Farnsworth on drums and John Webber on bass. All of them took fine solos, but Mabern — who was playing his fifth festival concert in three days — was particularly outstanding, dazzling the crowd with his brilliant technique and style.

Coleman and Mabern have both had brilliant careers, but they are by no means cruising. The quartet performed one of Thelonious Monk’s most complicated, up-tempo tunes (I believe it was the one titled “Thelonious”) and a soulful rendition of Erroll Garner’s “Misty.” On these tunes, Coleman got some intriguingly breathy sounds from his sax. Mabern, who is fond of inserting playful quotations into his solos and comping, played a line from “I’ve Got Rhythm” and another, I believe, from Mozart.

Gary Versace and Scott Robinson were a powerful duo in their concert at Hatch Recital Hall Thursday night. Versace began at the piano with an introduction to the various styles the audience could expect. He showed what could be called “all the ways to play ‘All The Things You Are,’ ” by Jerome Kern. He then brought out Robinson, who proceeded to play a tour-de-force saxophone rendition of Monk’s “’Round Midnight,” complete with circular breathing.

Over the next 45 minutes, Versace and Robinson had an almost symbiotic musical relationship, responding to one another’s playing and bringing out the best in each other.

On Versace’s “Child’s Play,” Robinson’s sax was so evocative, you could imagine a tiny human being opening her eyes and slowly discovering the world. On a free jazz piece, Versace seemed to get into a zone, pounding his way through a wonderfully dynamic passage. And on Johnny Mandel’s “The Shining Sea,” Robinson’s gorgeous tone was complemented by Versace’s sparkling high notes. As if that weren’t enough, on the last tune, by Lennie Tristano, Robinson alternated on sax and trumpet — a feat few musicians could pull off.

Elda Trio, consisting of three musicians from different corners of the world, played a variety of music that transcended borders and centuries at Christ Church. Swedish vocalist Emilia Mårtensson moved expressively as she sang. Flanking her were Slovenian accordion player Janez Dovč and Brazilian percussionist Adriano Adewale, both of whom used their instruments in unorthodox ways, providing beautiful coloration. Adewale also contributed subtle mouth percussion. While many of the songs were derived from the stories of folkloric cultures around the world, the one that left the deepest impression on me was a tune by Dovč that had no words but was sung gorgeously by Mårtensson.