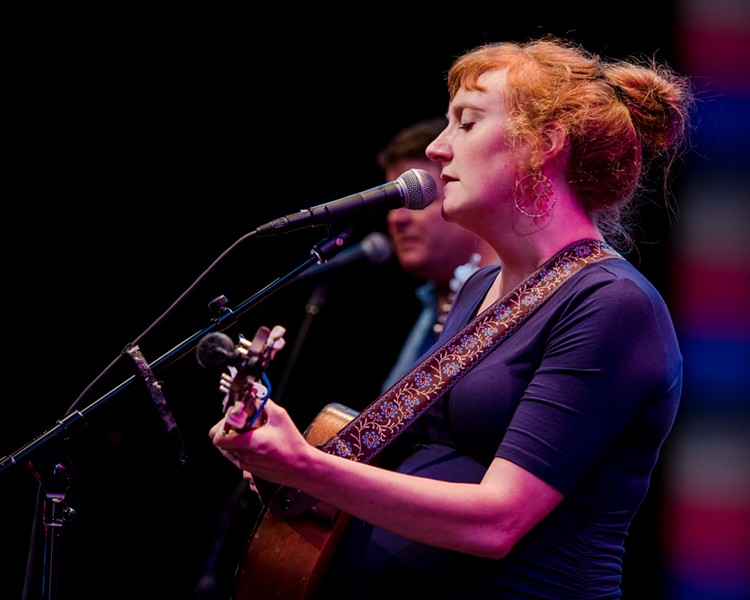 Playing in a band, it’s tough work, as Amanda Anne Platt & The Honeycutters made clear in their performance at Geva Theatre Center’s Fielding Stage.

Between songs, Platt chatted about how The Honeycutters had once played a department store — if you remember those — and introduced their song, “The Low Road,” with the sarcastic observation that, “There are so many similarities between myself and Bruce Springsteen.” After the band’s second song, she welcomed a long line of people arriving late and walking past the front of the stage with the comment, “It’s like a clown car.” And it was, but for the most part the audience stayed for the entire show.

There were a couple of cover songs in the first set: The Bee Gees’ “To Love Somebody,” which the Nashville-based band demonstrated is indisputably a country song, and a show-closer of Nick Lowe’s “What’s So Funny ’Bout Peace, Love and Understanding.”

But mostly it’s Platt’s show, and she writes about living in the heartland, among the touchstones of Americana and the whine of pedal steel guitar: airstream trailers; 18-wheelers; jukeboxes; independent women who “do better without that ball and chain;” fighting sadness with alcohol and killing the pain through “dance all night and sleep all day.”

Platt’s best line of the night: “Learning to love the crooked hands that built me.”

David Helbock does nothing right. This is the first time I’ve ever seen three guys playing the piano, and only one of them was touching the keys. Helbock was the one on the keyboard, Johannes Bär had his arms in the guts of the piano, fussing with the strings, Andreas Broger was tapping away on the lid and body with a drumstick and brush.

But that’s how they do it in Austria. This was the new Euro part of the longstanding curiosity at Lutheran Church of the Reformation, better known as the “Nordic and Euro Jazz Now” series.

Helbock also had a kick drum at his feet, somewhat unusual for a pianist. Bär had a nest of horns to choose from, of which the sousaphone was the most surprising. He also had a tambourine strapped to one knee and a small drum head to the other, and he even did some beatboxing. Broger played a half-dozen reeds, including bass clarinet. These were compositions played in the orderly manner of train cars falling into a canyon. This may explain why the band is called DH’s Random/Control.

Helbock seemed to spend more time inside the piano that out, raking the strings with a hand in zither-like fashion, while pounding that rarely-heard first black key. Piano teachers must have been running down the street and leaping into the Genesee River.

Several local musicians wandered out of the church at the end of the show with dazed looks in their eyes. One said to me, “That was the best version of Duke Ellington’s ‘In a Sentimental Mood’ I’ve ever heard.”

Jubilation! Celebrating Cannonball Adderley, 6 and 9 p.m., Kilbourn Hall. Another show celebrating the legacy of a jazz giant. The music of Adderley — who was only 46 when he died in 1975 — is recognized for its exuberance.

The Suitcase Junket, 7 p.m., City of Rochester Midtown Stage. Coming on before the Midtown Stage headliners the Allman Betts Band, Matt Lorenz — a.k.a. The Suitcase Junket — is a homemade, one-man band. He and his dumpster guitar literally do tour with the music in a suitcase: bottles, dried bones, an old gas can. Lorenz’s challenge will be to make this array heard over the crowd that will gather at Parcel 5. This show’s free.

Catherine Russell, 7 and 9:15 p.m., Temple Building Theatre. Russell has been a favorite of the fest for years. The easy comparison is Ella Fitzgerald, but her career has included a stint as a backup singer to David Bowie.

On Day Eight, I’m looking forward to hearing the Adderley tribute and, as always, Catherine Russell.