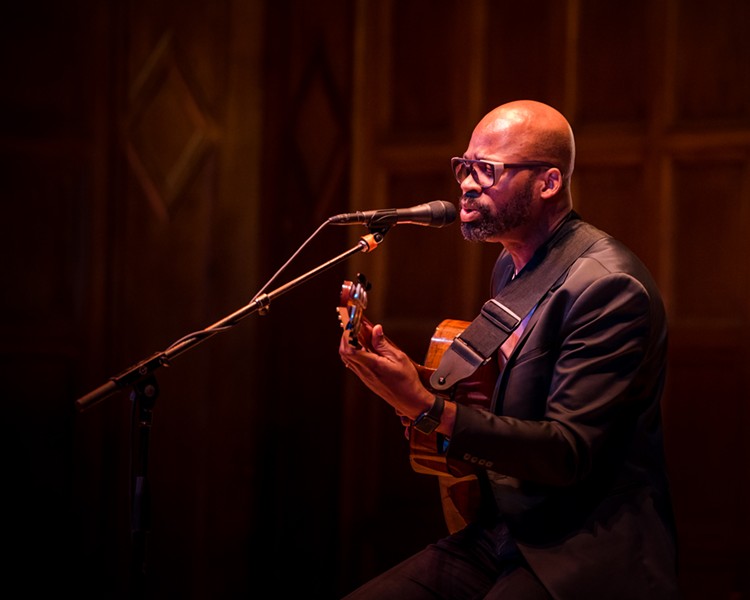 On Wednesday night at Hatch Recital Hall, Harold Danko played one of the finest concerts I’ve heard at the festival this year. It feels funny to call his opening tune, “To Start Again,” a “tune.” It was so packed with musical ideas, it was more like a jazz sonata. He played works like this for the entire hour. They were intricate compositions that allowed for improvisation, but they were also highly structured — with all the complexity of classical works. And there wasn’t a sheet of music in sight.

I’m not sure Danko played works from every decade, but the oldest piece he played was written when he was in college in the 1970’s. He told brief stories about the works, usually explaining the titles. You could feel the kind of experimental spirit he’s had through the years. At one point, as I watched his hands fly over the keys, I wrote down “symmetrical playing.” After he finished the tune, he confirmed that he was working with “symmetrical piano.”

There are many young players at the festival, bringing on new ideas and influences to keep the music evolving. But there is something profound about hearing the variety of musical experimentation and creativity that can only happen over a long career.

The picture was everywhere Wednesday: the unspeakably heartbreaking image of a father and daughter face-down in the Rio Grande. After some humorous songs, and some joking asides about how rough things are in his native England as well as in the United States, Ian Shaw got serious at Christ Church. He introduced a song about a refugee he got to know, who now lives in London. He dedicated the song, “Keep Walking,” the best tune of his set, to the father and daughter, Oscar and Valeria.

Shaw is like a jazz version of Elton John. With a huge voice and excellent piano-playing skills, he specializes in taking familiar pop songs — like Joni Mitchell’s “Woodstock” and Jimmy Webb’s “Wichita Lineman” — and giving them a pretty hardcore jazz treatment. He doesn’t just do variations on the tunes, he all but rewrites the melodies. One of the best of these was his treatment of Leonard Cohen’s “Dance Me to the End Of Love.”

When I saw that two great musicians, Lionel Loueke & Raul Midón, were playing together at Kilbourn Hall, I assumed they would be playing together. One of the most fascinating aspects of music is the kinetic energy that flows between musicians from different backgrounds as they play off each other.

But for most of the concert, Loueke played his songs solo and Midón played his songs solo. Not a whole lot of chemistry there, but there were highlights, like when Midón sang his excellent song “Pedal to the Metal,” reminding us of his distinctive percussive guitar style and soulful voice.

Thursday evening I can’t wait to hear former Miles Davis sideman George Coleman perform with his quartet at Kilbourn Hall, 6 and 9 p.m. I’m also going to check out the keyboardist Gary Versace with multi-instrumentalist Scott Robinson at Hatch Recital Hall, at 5:45 and 7:45 p.m. and the world music group Elda Trio at Christ Church, performing at 6:45 and 8:45 p.m.