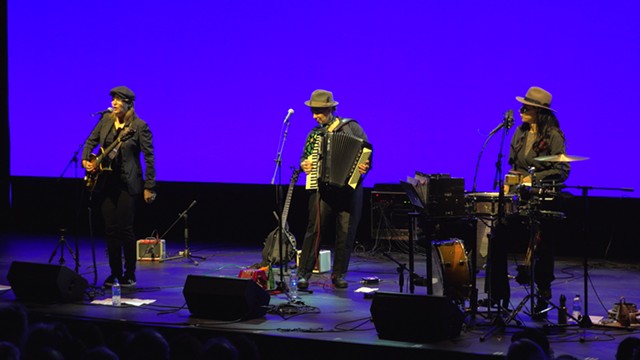 Interpreting the music of a beautiful beast

The beast in question is the gruff, hardscrabble world of Tom Waits. The trio charmed the Rochester International Jazz Festival last year, returned to Rochester for a show in January at The Little Theatre, and was back at it Tuesday at Geva Theatre Center’s Wilson Stage.

To some ears, Waits is an acquired taste. To other ears, he writes some of the roughest — and most beautiful — lyrics and melodies of the day. And when VickiKristinaBarcelona strips away Waits’ bark, that beauty becomes all the more evident.

The trio is Terry Radigan on guitar, Rachelle Garniez on accordion and concertina, and Amanda Homi on a skeletal drum kit with lots of extras — including shakers on her ankles and a boxy bellows instrument, the harmonium. The musicians sport natty hats and outfits that make them look like character actors in a Bogart film. But it’s the voices that captivate: three-part harmonies, with the women trading lines within each song with perfectly matched vocals.

They opened with Waits’ “Clap Hands” – these are all Waits songs – done ostensibly a cappella with the exception, of course, of their setting the rhythm with clapping hands. Then there was the menacing “Yesterday Is Here,” voices soaring like ghosts calling out, as well as “Way Down in the Hole” and “Walking Spanish” — with VickiKristinaBarcelona charming away Waits’ death rattle of a man being choked to death.

And then there are the songs that are inherently beautiful: “Jersey Girl,” “Hold On,” “You’re Innocent When You Dream” and the jaunty “I Don’t Want to Grow Up.”

These are gorgeous, cinematic songs, Homi said. “We all have our films that we see.”

Ozmosys is feeling the labor pains. But soon, this fall, it’ll be the birth of a new band.

The group is drummer Omar Hakim’s baby. “We’re almost done,” he told the Temple Building Theater crowd about the debut album, to be called “Eyes to the Future.”

The quartet is notable. The genre-restless Hakim has worked with Miles Davis, Davie Bowie, Weather Report, Madonna, and Daft Punk. Guitarist Kurt Rosenwinkel has been with Gary Burton and Eric Clapton, and produced a handful of his own albums. Bassist Linley Marthe played with Joe Zawinul. Keyboardist Rachel Z has been with Steps Ahead and Peter Gabriel, and has released her own albums as well.

So that’s a pedigreed lineup. What is Hakim doing with it?

He’s turning them loose and building it naturally, Ozmosys by osmosis. That’s a powerful rhythm section, machine-like on some songs. Everyone seems to be contributing to the writing. But it is evolving into a vehicle for Rachel Z. Her keyboards, synthesizers and effects are what define the sound; when she took a breather from playing, she was even using her phone to take photos of the band. And she’s a counterpoint: one of her compositions opened with lush synthesizers and a rain of Hakim’s cymbals.

The night’s Kodak Hall at Eastman Theatre is Jeff Goldblum & the Mildred Snitzer Orchestra, starting at 8 p.m. Goldblum has made a fine acting career out of being chased by Jurassic dinosaurs. But on “The Capitol Record Sessions,” the debut album he released last year with The Mildred Snitzer Orchestra (don’t look too hard, the band’s named after an old family friend), he seems like a fine player of standards and a master of stage banter.

Lionel Loueke and Raul Midon, 6 and 9 p.m., Kilbourn Hall. Both men have played the fest in past years, but not with each other. Loueke — a native of the West African country Benin — and Midon bring a wide range of skills to the stage, beyond their guitars.

Under One Sun, 6 and 10 p.m., The Wilder Room. Eight musicians from three continents, including Jamey Haddad, who has been a percussionist with Paul Simon for two decades. The bassist should look familiar: Roberto Occhipinti often finds his way to the jazz fest with one band or another. There’s a world-music feel to this jazz.

Kandace Springs, 7 and 9:15 p.m., Temple Building Theatre. Springs is a singer and pianist from Nashville, the home of country music, but her sound is all soul and jazz. She’s certainly a contemporary soul, having recorded hip-hop with Wu Tang Clan’s Ghostface Killah. But her restrained style might be better reflected in a cover of Roberta Flack’s “The First Time I Ever Saw Your Face,” a song Prince first asked her to perform.

On Wednesday night, I’ll be in search of old-time American roots music with Tamar Korn & A Kornucopia at The Montage Music Hall and Vilray at Geva Theatre Center’s Fielding Stage.