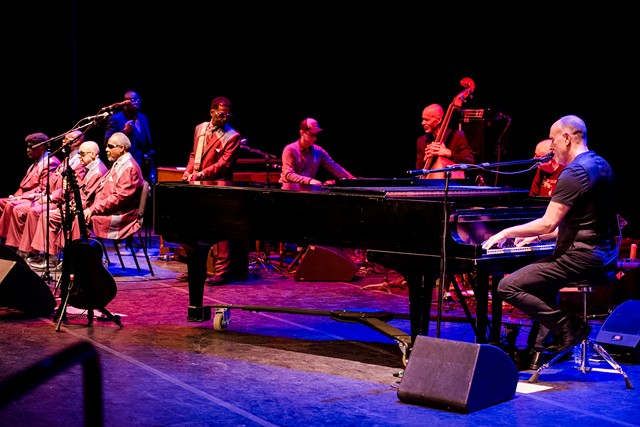 Songs fit for a King

Everything on Day 5 of the jazz festival was wonderfully copacetic, but I got to wondering: Do these tribute shows or centennial shows like SNJO’s salute to Art Blakey or  “Nat King Cole at 100,” performed by Paul Marinaro, go out on tour already put together or…? Wouldn’t it be cool if they got thrown together on the spot. I know I’m a bit of an instigator — I’m just sayin’.

Marinaro’s set was a reverent and informative one, interspersed with tidbits about Nat King Cole’s life. And although Marinaro didn’t sound like a carbon copy of the legendary crooner, Marinaro sang the songs the way they were supposed to be sung. Of course, he performed “Unforgettable,” but he also dug into lesser-known gems like “That’s All” and “Sweet Lorraine.” Marinaro also offered up some nascent political jabs directed at the president on the sad-but-funny-and-true song “That Voice.” Marinaro ended the performance appropriately enough with Duke Ellington’s “Caravan.”

The second thing on my mind was the performance of the Blind Boys of Alabama. Their show with Marc Cohn was nothing short of phenomenal, and the audience roared its approval thunderously. When a song warranted an ovation, folks got up on their feet. But how could the quartet know? Short of out-and-out telling them, is there something we, the sighted, could do to let them know how truly moved we were?

From the moment the Blind Boys of Alabama joined Marc Cohn on stage you knew it was gonna be special. It was a journey through gospel tunes and Cohn’s material which, though it didn't proclaim to be gospel, was certainly spiritual. And Cohn was a generous host and band leader, giving the Blind Boys more than a few times at bat.

The group heaped love on Cohn’s songs as if they were their own. And to answer my own question from earlier in this post, when the crowd hit their feet, the Blind Boys of Alabama knew it. They just had to.

Tomorrow night I’ll be hangin’ with the smart set to see Kandace Springs at the Temple Building Theater and Jeff Goldblum & the Mildred Snitzer Orchestra at Kodak Hall. Until then, adios.