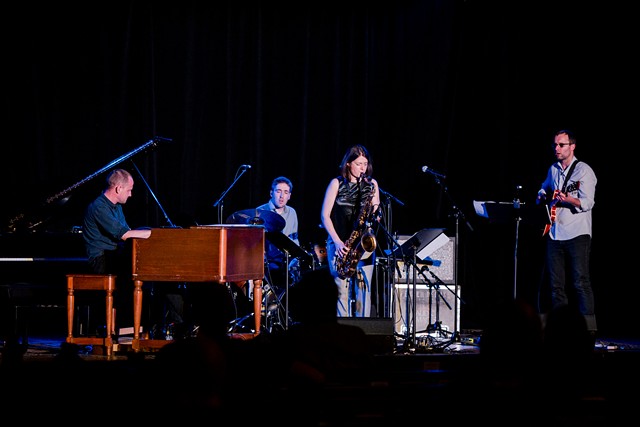 The language of the piano

One of the great things about the Rochester International Jazz Festival is the opportunities it has offered over the years to hear members of the greatest generation of jazz players. Sonny Rollins, Oscar Peterson, Dave Brubeck — they’ve all been here, along with several more legends. Harold Mabern belongs to that generation and he spoke fondly about many of his contemporaries — including John Coltrane, Clifford Brown and Hank Jones — Tuesday night at Hatch Recital Hall.

But, after seven decades in jazz, Mabern spoke brilliantly in another language: piano. He played Hatch’s Steinway with a fluency that could only be achieved through a long, complicated relationship with the instrument. Mabern’s vocabulary consisted not only of impossibly fast runs interspersed with well-placed chords, but also an absolute mastery of dynamics. His range of emphasis was broad, making for gorgeously emotional passages. His ability to handle wildly disparate melodies with his right and left hands simultaneously was nothing short of breathtaking.

Mabern’s repertoire included his own composition, “There But for the Grace of,” a tune he said came to him while he was walking through Grand Central Station. He also played standards like Irving Berlin’s “The Girl That I Marry,” Ray Noble’s “Cherokee,” and Brown’s “Daahoud.” He topped it all with a grand finale, improvising extensively on Coltrane’s adaptation of Richard Rodgers and Oscar Hammerstein’s “My Favorite Things.”

Mabern plays with his trio at 6:15 and 10 p.m. Wednesday at Max of Eastman Place. He’ll also be at the piano at 6 and 9 p.m. on Thursday at Kilbourn Hall, as part of the George Coleman Quartet.

When Trish Clowes My Iris began to play at Christ Church, there were guttural growls coming from Clowes’ saxophone. On the first two tunes, it seemed like it was every player for him and herself. Even though there was sheet music on the stands, rather than playing together, guitarist Chris Montague, organist Ross Stanley, drummer James Maddren, and Clowes seemed to be playing against each other.

And then, on the third tune, suddenly there was melody, harmony — a united front. There was wonderful interplay between the members of the quartet. More dissonance came on other tunes, and then there was more harmony on Clowes’ tune “If.” Dissonance can, of course, be used effectively. But to my ears, this did not fit that description. Maybe it was the church’s acoustics — not designed for amplification — that contributed to the seemingly rough passages, but I believe all of it was intentional.

Guitarist Mikkel Ploug played a fine set of originals with his trio at the Lutheran Church. His guitar style was reminiscent of Pat Metheny, adventurous but not too “out there,” featuring high-register notes and clear-as-a-bell tone. He often began by laying out the intriguing chord pattern underlying the tune before he began improvising. Sometimes those chords would reappear between runs. Midway through his set, Ploug engaged in a different kind of fusion, playing two classical pieces by contemporary Danish composer Bent Sørenson on the electric guitar.