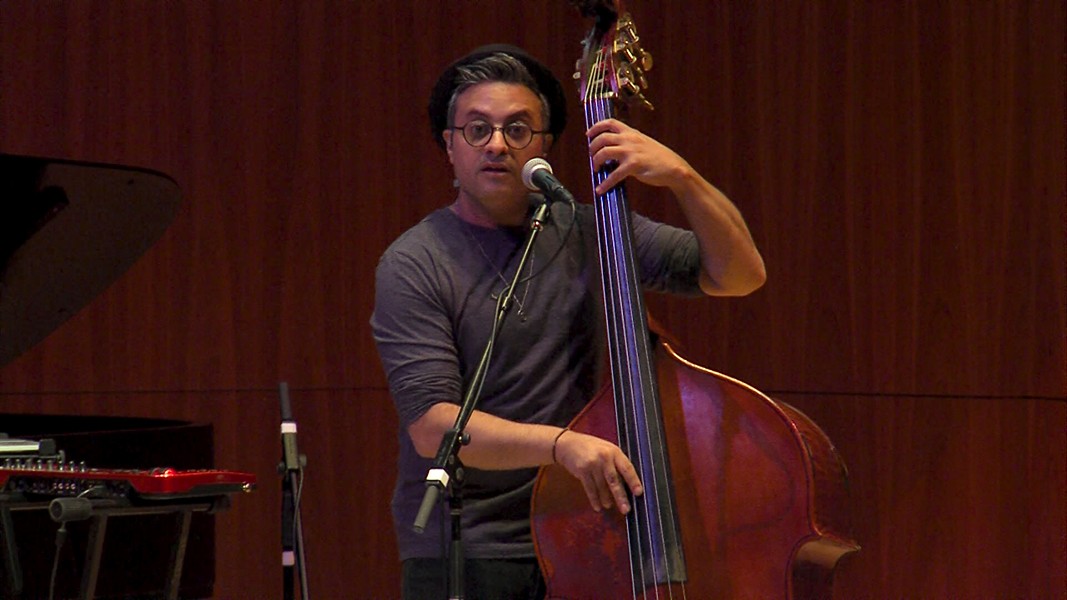 The beat goes on

Cyro Baptista was a combination of Frank Zappa and George Clinton all rolled up into one mad Brazilian percussionist at Geva Theatre Center’s Wilson Stage on Monday night. In a furry yellow hat, Baptista ruled the stage with a table full of objects in front of him. With cymbals to the right and plumbing pipes to the left, Baptista gravitated from one “instrument” to the next.

Those “instruments” included miniature fans, a crazy group of strings holding a mass of colorful balls, and a megaphone. The plumbing pipes provided a highlight when a tune was coaxed out of them using small paddles. Baptista’s bandmates, who he said were playing together for the first time, were all excellent.

There were wonderfully wild accordion and guitar solos, ranging from slinky James Brown funk to machine-gun Dick Dale picking. Baptista told jokes, danced, sang in a growling manner, and played everything in sight — including the audience, which happily supplied waves of clapping on the final tune.

Over the last half-century, the bass has gained prominence as a spotlight instrument because of greats like Stanley Clarke, Jaco Pastorius and Victor Wooten. But all of them made their names with electric basses. Well, move over for Adam Ben Ezra and his double bass. Last night at Hatch Recital Hall, the Israeli bassist had the audience spellbound.

Aside from his bass, Ben Ezra had a keyboard/drum machine, piano, harmonica, computer, two pedalboards, his voice, and a flute (which he never touched). Most of his tunes were multilayered, employing much of the above.

He would typically play a bass line, have that riff continue while he added percussion, have both of those behind a series of strums or arco playing, and keep building until he had a symphony of samples going. He played his pedalboards like an orchestra conductor, bringing in and dropping out parts at will. It was basically an exercise in counterpoint. Imagine Pachelbel’s Canon with every part playing at once.

I preferred the few times when Ben Ezra only played bass, because it was such a tour de force combination of virtuosic playing and hand percussion. These two elements were so intertwined that tonal phrases were completed with percussion and vice-versa.

After all of that wildness, Kari Ikonen provided a more subtle conclusion to my evening. Most of his compositions started lightly and built gradually until the piano, bass and drums were going at full throttle. But there were no catchy heads or even concrete melodies; Ikonen’s tunes were more impressionistic, with clusters of notes filling the aural soundscape.