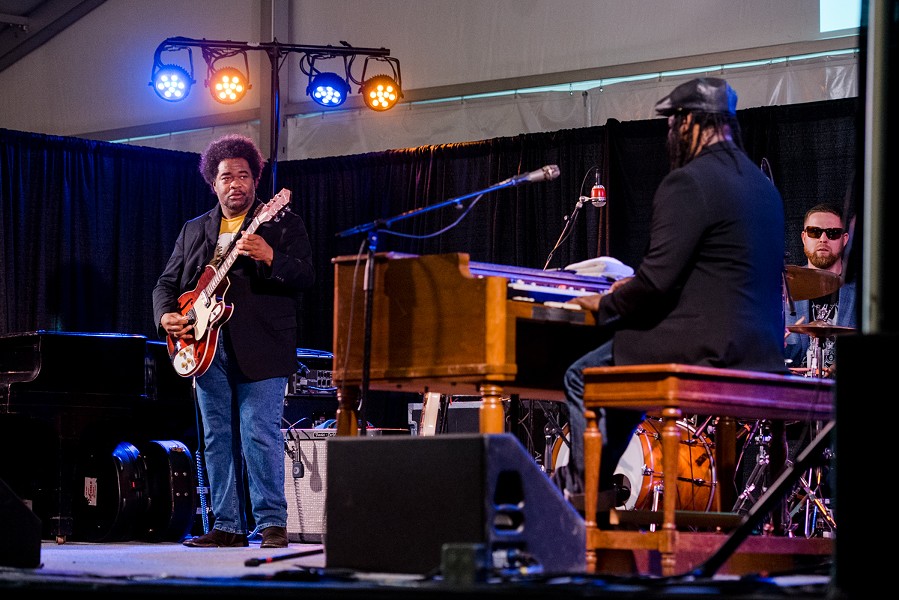 Bria Skonberg. Yup, Bria Skonberg. I was just gonna type her name here a few thousand times. But even that would leave a hole that needs explaining. Let’s talk about the music of other artists I witnessed on Monday night first.

The Willows arrived at Max of Eastman Place as if descending on a cloud. These three young Canadian ladies had me at “Bonjour,” and I was enamored of their sound already, just from the records I’d spun and the videos I’d found on their website.

They were charming and down-to-earth, but don’t include their voices in that analogy. Their pipes were nothing short of angelic splendor and spectacle, as they spun around each other with a blast of vintage voodoo.

I particularly liked when they paused between numbers to explain why they didn’t pause between numbers. They pulled out some Andrews Sisters, so we know they knew what’s what. The majority of the selections they performed were theirs, along with some post-Lindy Hop boogie woogie they had up their sleeves and in their shoes.

The Willows will perform again on Tuesday at The Montage Music Hall, at 6 and 10 p.m.

Over yonder, I squeezed into the Squeezer’s tent for some of Seattle’s loud and proud Delvon Lamarr Organ Trio. The guitar playing prevalently used a“Rainbow Bridge” style, complete with stretched string dive-bombing and screaming feedback. Lamarr was perched at the B-3, but seemed to take on more of a role in the rhythm section, rather than fronting the whole affair. I would have preferred more pumping organ rather than shredding guitar, though it really was good ’n’ hot.

I can’t tell at all where Bria Skonberg derives more of her joy from: singing or trumpeting. She did sing a lot more than on her previous visit. On this night, she let her voice tell the story, and it was one of beauty and heartache, but not without plenty of brassy fun.

She would sing a few bars, establish pace, grab her trumpet, and dive in with the rest of her most excellent outfit. The highlight this entire week for me will be her breathtaking take on Duke Ellington’s “Mood Indigo.” Bria Skonberg was the most, to say the least.

For those of you who still appreciate my advice, check out Paul Marinaro as he salutes Nat King Cole’s 100th birthday at Kilbourn Hall, as well as Mark Cohn & the Blind Boys of Alabama at Kodak Hall.