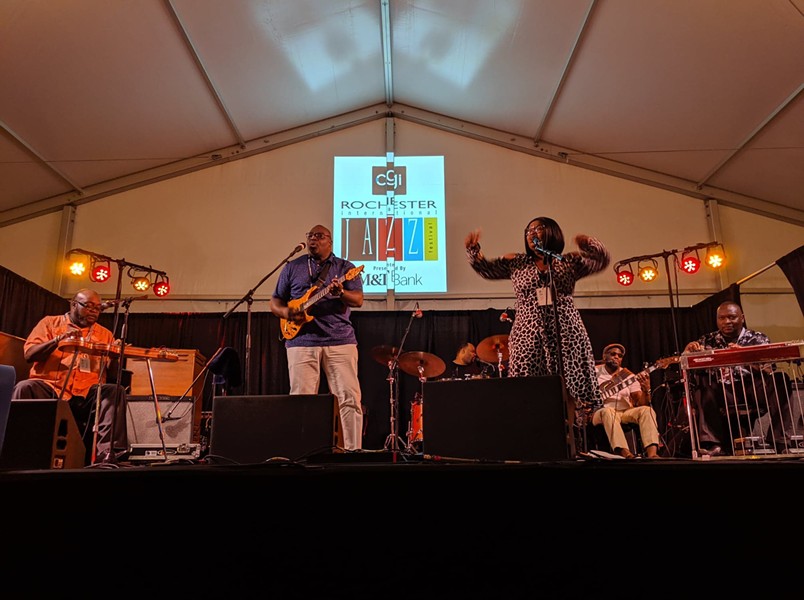 A kind of church

Rochester’s sacred-steel gospel stars, the Campbell Brothers, parted ways with the House of God because the Pentecostal church wanted to keep the music within its walls. The Campbells wanted to take the sound to the world. It was a difficult decision for the Campbells, but jazz festivals throughout this country and Europe have been richly rewarded — the CGI Rochester International Jazz Festival included.

So it was church for believers and heathens alike on Sunday night at the Squeezers Stage @ M&T Pavilion, on Parcel 5 — although it did take a while for the Campbells to properly loosen up their congregation. “We call this kind of music ‘Jump for joy,’ ” Phillip Campbell told the crowd of several hundred in the tent late in the second of two sets. And with that, the Campbells leapt into “Don’t Let the Devil Ride,” which did get the folks up and out of their seats, waving their arms and jumping for joy.

Yes, the Campbell Brothers are of the church. But they open their arms wide, with the three brothers – Phillip on electric guitar, Chuck on pedal steel and Darick on lap steel – welcoming ears of all faiths. It’s no wonder The Allman Brothers would welcome one or more of the Campbells onstage whenever the venerable southern rockers passed through Western New York.

In fact, with a rhythm section consisting of Phillip’s son Carlton on drums and bassist Daric Bennett, the Campbell’s opening number, “Wade in the Water,” sounded more like a rock anthem than the classic spiritual that it is. They brought out singer Denise Brown for the stomping groove of “I Ain’t Gonna Cry No More,” and then again on “Hell No Heaven Yes.” Chuck had his pedal steel talking in the signature whine of the sacred steel, mimicking the human voice, as Brown gave it the hands down for hell, hands raised for heaven. Phil leapt to his feet – the Campbells Brothers are generally seated while they play – and strutted across the stage, before clapping along in rhythm as his brothers’ instruments talked back and forth to one another.

“Amazing Grace” had more pedal-steel chatter, and then a break from the format — as the festival’s co-producer Marc Iacona was summoned to the stage with his trumpet for the classic blues of Miles Davis’ “So What.”

Perhaps next time, the Campbells will bring out the latest project they’re working on. A version of Bruce Springsteen’s “We Take Care of Our Own,” which they’re recording for a Philadelphia group assembling a benefit for veterans and first responders.

Circus No. 9 hits many of the traditional bluegrass tropes. Seems like I heard the word “sorrow” a couple of times during the Tennessee band’s first show at Geva Theater Center’s Fielding Stage.
But what about when Matthew Davis with his banjo, and Thomas Cassell with his mandolin, left the stage for a few minutes, leaving us with just guitarist Ben Garnett’s spidery string-raking and double-bassist Vince Ilagan’s solo? That was jazz, I swear.
Despite the frequent doses of sorrow, the songwriting often deviates from traditional bluegrass subject matter. Circus No. 9 writes about disappearing into your headphones. The band members are virtuosos, and they play like they came out of a music school rather than off of a porch. Circus No. 9 drifts from laid-back cool to railway grooves. What’s with Ilagan’s bowed bass? That’s chamber-music stuff.
Circus No. 9 is a band of young overachievers who have you thinking: I’ve wasted my life in pursuit of treasure and sexual partners. Look at these guys: They’re just happy to be bluegrass musicians.

Paa Kow, 6 and 10 p.m., The Montage Music Hall. Upbeat, percussion-heavy polyrhythms from Ghana. This sounds like a party.
Djabe, 8:30 and 10 p.m., Big Tent. The Hungarian band’s fourth visit to the fest. It’s worldly jazz with some exotic instruments. The festival’s co-producer John Nugent usually shows up with his sax.
Bria Skonberg, 6 and 9 p.m., Kilbourn Hall. Skonberg plays trumpet and sings – not at the same time – with big energy. Behind those smoke-laden vocals, her songs address topical issues such as civil rights and a world oversaturated by media, which means I stop writing right here.

I’m planning on hitting the shows by Paa Kow and Enemy, a trio whose members are based in London and Berlin, playing what sounds like some maddeningly crazy rhythms at Christ Church.