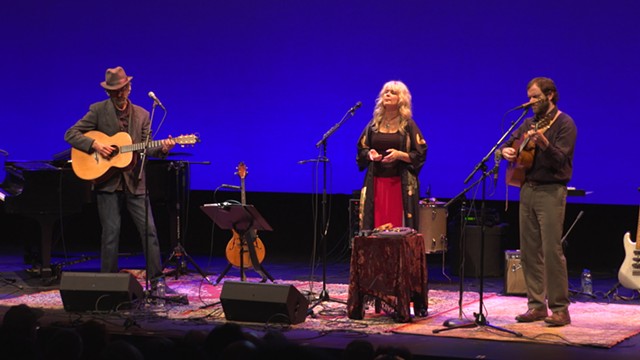 In memory of Jack Allen

I am dedicating this blog entry and all those to follow this week to the memory of Rochester big band leader and trumpeter Jack Allen. Allen passed away peacefully Saturday. He was 93. Check out this story we did on Allen back in 2005. R.I.P., big daddy.

The drummer called dibs on Kilbourn Hall at the early set from Stefon Harris & Blackout. The whole band was in Harris’s pocket and connected at the hip and heart. Harris shot dynamic slings and arrows on the vibraphone, and the band caught and emphasized them back in return. It was a fair fight.

Toward the end of the set, the capable saxophonist took up what looked at first like a cross between a fluorescent light bulb and a flute. He talked into it and it came out sounding like auto-tune (yuck), but more futuristic and tolerable as he went on in a beeline to the future. It grew on you.

As the star of the show, Harris was blinding one minute, introspective the next. You could almost feel the mallet-induced wind emanating from the stage like a cool breeze. He gave a thrill when he asked audience members to shout out random notes. Mine was B-flat, by the way. He proceeded to riff elegantly with just those notes as if it were a card trick.

I walked what felt like 40 miles next to Geva Theatre Center. It was like walking toward the sun — it never seemed to get any closer. It was worth the hassle, this traverse through zip codes, to hear Over the Rhine.

The band was a magnetic, poetic tapestry that wrung tears from those who could feel. The three-part harmonies were luxurious, and the atmospheric slide guitar painted big sky vistas. Over the Rhine had fans over the moon, where the dish ran away with the spoon. Wood and wire poured together. Pretty effing amazing.

What’s so fun about klezmer is that it doesn't take itself too seriously. Walking into the Big Tent, I felt underdressed for the wedding. Michael Winograd & The Honorable Mentshn had the room in high gear with their rather onomatopoeia-esque toots and bleats and crashes. That and a frozen custard from Abbott’s, and I was done, son. Until another exciting adventure. Mazel tov.