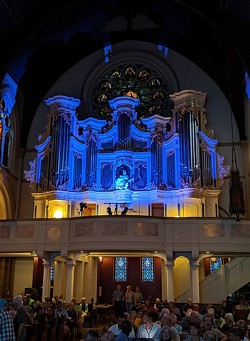 Pulling out all the stops

Kit Downes played an era-bending concert at Christ Church Sunday evening, creating decidedly 21st-century avant-garde improvisations on a late-Baroque organ. Christ Church is famous for its distinctive Craighead-Saunders Organ, a near-perfect copy of a 1776 organ that was built in East Prussia and now resides in a church in Vilnius, Lithuania. But over Christ Church’s many years as host of the “Made in The UK” series, no jazz festival musician has played it, until now.

Downes was out of sight, situated at the keyboard in the organ loft at the rear of the church, so a camera sent the live image to a large screen at the front. But I chose a seat on the side so I could see both the screen and the magnificent organ itself. Downes was surrounded by 100 pipes of varying sizes towering above him. Behind the console are over 2,000 more pipes. At one time or another, Downes literally pulled out just about all of the organ’s 33 stops that serve to “color” the music.

Downes’ music ranged from the most subtle of quiet touches to the loudest, universe-creating swells. He played some highly accessible, wondrous passages near the start, some patterned, almost serial music toward the middle, and then gradually got into heavier territory. Toward the end, his composition “The Last Survivor” included sections where he leaned into the keys with his arm or fist to create sounds that probably were not heard in the Baroque era.

Deep dive into the piano repertoire

Bill Dobbins led the audience at Hatch Recital Hall on a fascinating journey through different jazz piano styles. Playing works by Bud Powell, Fats Waller, Duke Ellington, Bill Evans, and others, Dobbins pointed out innovations that in some cases had been attributed to others. For instance, he believes “Blue Rose,” by Ellington, may have influenced Miles Davis and John Coltrane in their use of modal music in the late-1950’s.

Dobbins also showed how one of the legendary teachers in jazz, Lennie Tristano, had students reinvent tunes. As an example, he played “Pennies From Heaven,” first in a major key and then in a minor key. He then played Tristano’s re-composition, “Lennie’s Pennies,” which highlighted Dobbins’ dazzling keyboard technique.

Over the years many of the festival’s most experimental groups have played at the Lutheran Church. But Jostein Gulbrandsen and his quartet did something truly radical Sunday night: they played straight-ahead jazz. Gulbrandsen is a superb guitarist, playing some of the fastest legato runs and the most melodic solos I’ve witnessed. His band — with Megumi Yonezawa on piano, Mike McGuirk on bass, and Mark Ferber on drums — was equally strong.

The quartet focused on Gulbrandsen’s compositions, including “Cold Times,” which, though it was inspired by his native Norway’s winters, had a delightful country-swing feel. But one of the highlights of the set was a rendition of the standard “Lullaby of the Leaves.”