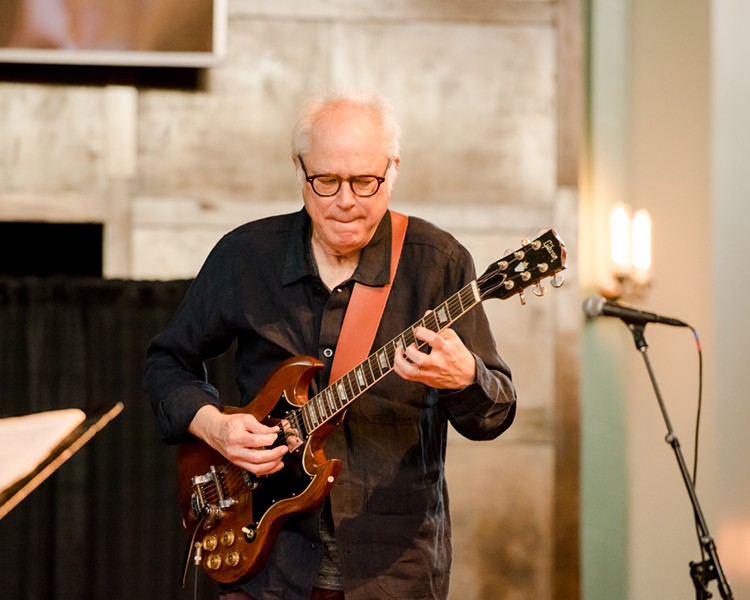 Off the top of his head

It’s a stunning moment when an artist allows us inside his or her head, to that lifetime-retrospective rattling around in the brain. But that’s what happened during the second show from the Bill Frisell Trio on Saturday night at the Temple Building Theater. This is the 18th Rochester International Music Festival. I’ve covered them all, and I would never pick an all-time best show. But this one would certainly be in the conversation.

Frisell opened with an uninterrupted, 55-minute medley of guitar, bass and drums. Fifty-five minutes — that’s supposed to be all there is, right? But after a moment’s pause, the Bill Frisell Trio went right back to work. Another 25-minute, uninterrupted medley.

Frisell is a modest man, both in style and words. I’ve met him a few times, and after previous shows at the festival he’s even graciously written down his setlist for me in my notebook. Frisell’s mind seems to fuse music and abstract art, reaching for whatever genre fits the mood he’s trying to create with his band of the moment. It’s a palette of jazz, blues, folk, rock and electronics.

His band on Saturday understood this. Bassist Tony Scherr and drummer Kenny Wollesen have played on and off with the guitarist for more than 20 years. There was no setlist, and Frisell never told his bandmates, who were leaning in less than eight feet from Frisell the entire show, what tune they were moving on with next. He’d just hit some notes, and they fell right in.

Frisell kept it deceptively simple, using just one electric guitar the entire night. What would he think of Jackson Browne, who lines up 16 or 18 guitars behind him at his concerts?

The songs from the seamless first set were set apart only by subtle shifts in tempo. A setlist spilling from Frisell’s head. After the show, I had to ask him to write them down. As best as he could remember, he had opened with Stephen Foster’s “Hard Times,” and tucked in there was Milt Jackson’s “S.K.J.,” Henry Mancini and Johnny Mercer’s “Days of Wine and Roses,” John Lennon’s “In My Life,” and John McLaughlin’s “Follow Your Heart.”

That 25-minute encore included some of his originals: “Levees,” “Rambler,” “Probability Cloud,” “Strange Meeting,” “Small Town.” Then Thelonious Monk’s “Evidence,” Wes Montgomery’s “Bumpin’ on Sunset.” Then a gorgeous, heart-wrenching version of “Shenandoah,” slow and reverb-filled, with a soaring conclusion, before closing with an upbeat “What the World Needs Now is Love.”

Sly and scuffed up

By Day Two of the festival, the Jake Shimabukuro Ukulele Cult had moved on to Kilbourn Hall, leaving Geva Theatre Center in relative calm. It was a deceptive calm because, as Kevin Gordon explained, when you’re raised in Louisiana, there’s always something amiss.

Over the Rhine, 5:30 and 7:30 p.m., Geva Theatre Center’s Wilson Stage. Named for the Cincinnati neighborhood where the duo of Karin Bergquist and Linford Detweiler come from, Over the Rhine is a beautiful sound of tiny moments and big ideas.

The Campbell Brothers, 7 and 8:45 p.m., Squeezers Stage @ M&T Pavilion. Rochester’s stars of sacred steel music are not simply a church experience. This is jazz, soul and rock.

Stefon Harris Blackout, 6 and 9 p.m., Kilbourn Hall. Here in Rochester, we know vibraphone. Joe Locke, the Rochester native who has played the fest several times, has taught us all about it. Stefon Harris will continue the lesson that the vibes aren’t merely cocktail jazz, they’re about having real conversation through music.

Kit Downes, 6:45 and 8:45 p.m., Christ Church. Downes will play the most spectacular musical instrument in Rochester, Christ Church’s Craighead-Saunders pipe organ. This will shake your sternum.

In addition to The Campbell Brothers, I’ll be checking out Circus No. 9 at Geva Theatre Center’s Fielding Stage, a progressive fusion of bluegrass and jazz from East Tennessee.