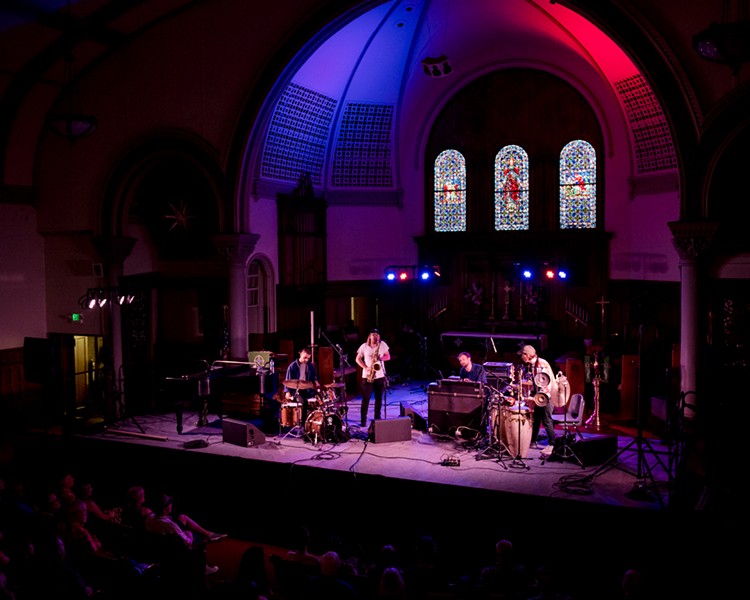 Back to the future

If you closed your eyes during a set by the Leo Richardson Quartet at Christ Church Friday night, you could easily imagine that you were back at Minton’s Playhouse in Harlem, circa 1959. The saxophonist wails, with a muscular and edgy sound that meanders, but to all the right places. The pianist, bassist and drummer are cooking, providing a solid backing groove.

But you’re in a church in 2019, and the group playing consists of four British men who have mastered that classic 1950’s, Blue Note Records sound. Jazz has reached Mozart status: a great musical tradition that the world now shares. Hearing Richardson’s band and his original tunes was a great way to start the jazz festival’s opening night.

As in the heyday of jazz, every tune began with a catchy head. When it was time to solo Richardson played furiously from start to finish. Pianist Rick Simpson had a refreshingly different approach, dancing over the chords in the higher register, sparkling over the bass and drums.

Things couldn’t have been more different at the Lutheran Church, where Girls in Airports played to an enthusiastic crowd. The band didn’t play tunes; they constructed sound sculptures. A rhythm would begin, a breathy saxophone would enter, and then a minimalist keyboard would build on the sonic structure.

It got pretty wild when the electronics became ear-splittingly loud, or when the saxophone transformed itself into a raging elephant. There were many great moments, including a two-man percussion solo with some tuneful drumming on the congas. At one point, just when everything was chaotic and dissonant, there was a wonderfully incongruous, hymn-like tune emanating from the keyboard.

Sing us a song, you’re the piano woman

You remember the Billy Joel song. Well, what if it were about a woman? Janice Friedman plays for a living at The Center Bar in Manhattan, taking requests and attempting to cut through the noise of people socializing. Friedman brought some of that spirit to Hatch Recital Hall, though she pointed out it was much quieter.

She played some old-time honky-tonk on tunes like “Sweet Lorraine,” and with a lively samba style on an Antonio Carlos Jobim song. She occasionally sang cabaret-style, but with some scat-singing thrown in for good measure. You could tell she had played all of these songs countless times. As she moved through “My Funny Valentine” in a subtle, touching manner, it was as if she were inside the song.

All of this might not have been particularly special were it simply standard cocktail music. But this woman could really play. When she soloed, the left hand held down the fort in the bass while her right hand flew over the keys.

On Saturday night, I’m looking forward to hearing one of my favorite guitarists, Gilad Hekselman, at the Lutheran Church. I’ll also check out the piano-saxophone combo of Peter Johnstone and Tommy Smith at Hatch Recital Hall, and I’ll head over to Christ Church to hear the British quartet Empirical.