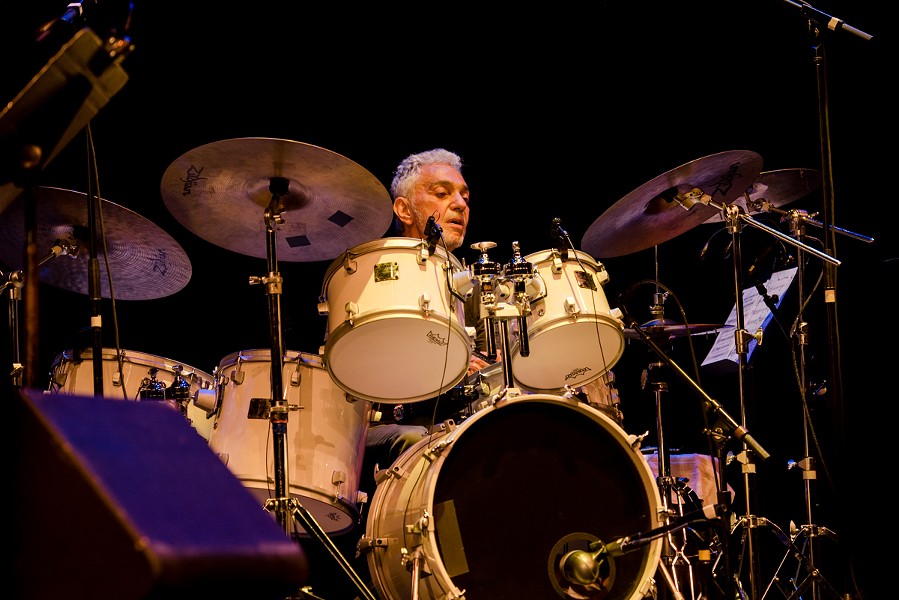 After 18 years, the secret is out. The Rochester International Jazz Festival isn’t really a jazz festival. It’s actually a culture museum of many rooms.

But on Friday night, opening night of the nine-day event, the fest did have its giant jazz moment: the Steve Gadd Band, at Eastman Theatre’s Kodak Hall.

Gadd is a bona fide Rochester son: raised in Irondequoit; Eastridge High grad; Eastman School of Music; lived here for years. He’s one of the world’s most sought-after drummers; when James Taylor visited Gadd, people would see him strolling along the Erie Canal.

“It’s always great for me to come back here,” Gadd told the audience, which looked to be approaching 2,000 or so. “I love this place.” But, he added, it’s also frightening. What if the show crashes?

Relax, you’re Steve Gadd. The band is Taylor-made: most of the musicians are part of James Taylor’s band, including Gadd. These guys know what they’re doing. A lot of elegant, 4 a.m., blue-room jazz fusion. While the six-piece band included electric guitarist Michael Landau and electric bassist Jimmy Johnson, the fusion never turned into rock. Not even with the encore of Bob Dylan’s “Watching the River Flow,” which they turned into a jazz crooner, with pianist Kevin Hays handling vocals – mindful of the late Mose Allison.

Hays and trumpeter-flugelhorn player Walt Fowler – who must be the wild hair here, after Gadd revealed Fowler once played in Frank Zappa’s band – were the jazz constants. Duke Gadd, Steve’s son, added the exotic textures with congas and hand percussion.

But this is Steve Gadd’s music. He may have spent decades playing with big-ticket names such as Paul Simon and Eric Clapton, but he’s recently been focused on his own sound. Gadd’s released four of his own albums in the last six years. The music is all grooves and natural textures, the band plays as a group and when they do solos, no one turns it up to 11.

The opening “Where is Earth?” felt spacy, and “Auckland By Numbers” was the kind of ballad these guys excel in. Keith Jarrett’s “The Windup” was a subtle highlight, with the rest of the band stepping away to watch as Steve and Duke engaged in a solo battle. No, it wasn’t a battle. It was a family conversation.

Exploring a dusty room of the culture museum, I discovered some excellent honky-tonk at Geva Theatre Center’s Fielding Stage. The band Western Centuries is loaded with three songwriters, although one of them was out of action for this gig. But amid the whine of pedal steel, the words of Seattle drummer Cahalen Morrison and guitarist Jim Miller – who’s familiar in these here parts for his work with Ithaca’s Donna the Buffalo – rang clear: whiskey and dancing.

And there was history as well. Miller sang about a Christian evangelist of a few centuries ago who paddled his kayak to an island inhabited by Native Americans. They weren’t particularly interested in being converted.

“They just went around and filled him with arrows,” Miller said.

Western Centuries returns to Rochester in September for a gig at Abilene Bar and Lounge.

Patti LaBelle headlines in Kodak Hall at Eastman Theatre, starting at 8 p.m. That crowd should be able to catch the tail-end of Southside Johnny and the Asbury Jukes, the soul-laden rockers who will be Having a Party, to paraphrase one of their songs, at the East Avenue and Chestnut Street Stage. The party starts at 9 p.m., after the Subdudes have stirred the drinks with their start on the same stage, starting at 7 p.m.

Bill Frisell Trio, 7 and 9:15 p.m., Temple Building Theater. Frisell is a frequent performer at the fest, but the shows are never the same. The prolific guitarist’s latest album, “Epistrophy,” ranges from The Carter Family to the James Bond theme “You Only Live Twice.”

Scottish National Jazz Sextet, 6 and 10 p.m., The Montage Music Hall. In a festival that features a handful of tributes to jazz icons, this is a night to remember Art Blakey. Rochester’s Bill Dobbins joins the group on piano.

Saturday night, I’m looking forward to seeing Gordon and Frisell. And if I can squeeze in Tommy Smith and Peter Johnstone at Hatch Recital Hall, it’ll be a great night. I’ve seen what Smith, a saxophonist, can do when there’s a piano in the room. In 2016, playing at Kilbourn Hall with Makoto Ozone, Smith walked over to the raised piano lid and placed his tenor sax into the body of Ozone’s Steinway, playing the sax until the piano’s strings could be heard vibrating and shimmering ever so slightly.