Rochester ex-pat Robin McKelle is far from your stock blues belter or jazz singer. She detours around those parameters , forging her own path. This path led her to the Harro East Ballroom last night. She has a jazzy voice that follows a certain discipline in tone and attack, especially when singing out-and-out jazz. There was an extended scat portion of the show to clear up any doubt.

McKelle also sang a couple of pop tune and totally reworked them: Sade's "No Ordinary Love" and Amy Winehouse's "Back To Black." Both tunes were jazzy in mood and execution, proving what a fine vocalist McKelle is and that jazz can pop up anywhere. And the capacity crowd ate it up.


I'm a little leery about modern R&B live shows, with their over-percussioned, over-keyboarded, over-bassed stage sound which often  makes them sound like rhythm & mush, but Jill Scott's show was blended precisely and beautifully. She had three male back-up singers, which was refreshing, and a band that threw down a velvety shag. But most of all, the woman at the front of the whole initiative, Scott, sang with a rich and rafter-tickling alto and authority that packed so much power that I'm not that leery anymore. Call me a convert. 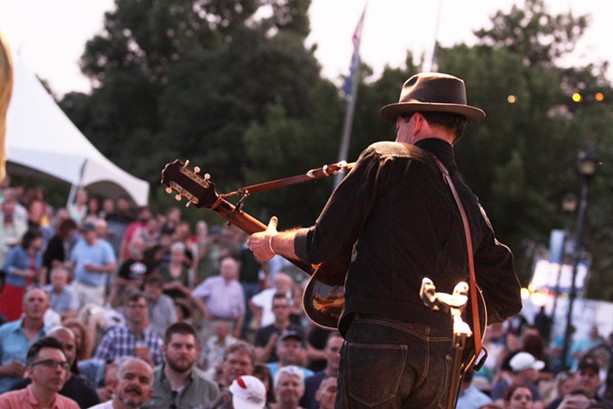 In his Canadian tuxedo, Pokey LaFarge played some awfully sweet, post-war bop at Martin Luther King Jr. Park. Not to be thrown in with other retro rockers who simply re-hash, LaFarge and crew write their own stuff. It could be argued that it's still a throw back, but the people in front of the stage didn't care; they had some ass-shaking to do.

On my way out I stuck my head into Christ Church to catch up with Gwyneth Herbert again. I wanted to see if that song written from ideas submitted by eager audience members the night before included my fears. I wanted to see if — in the face of helping immortalize our fair city — Herbert had included the Garbage Plate. Well, yes: Herbert included a line about eating trash in an otherwise pretty song. Sometimes, this town steps on its dick.


If you wanna argue with me Saturday about the Garbage Plate or discuss other kinds of self-abuse, you can catch me at Deva Mahal and Tower of Power featuring my good buddy Ron Mesh.