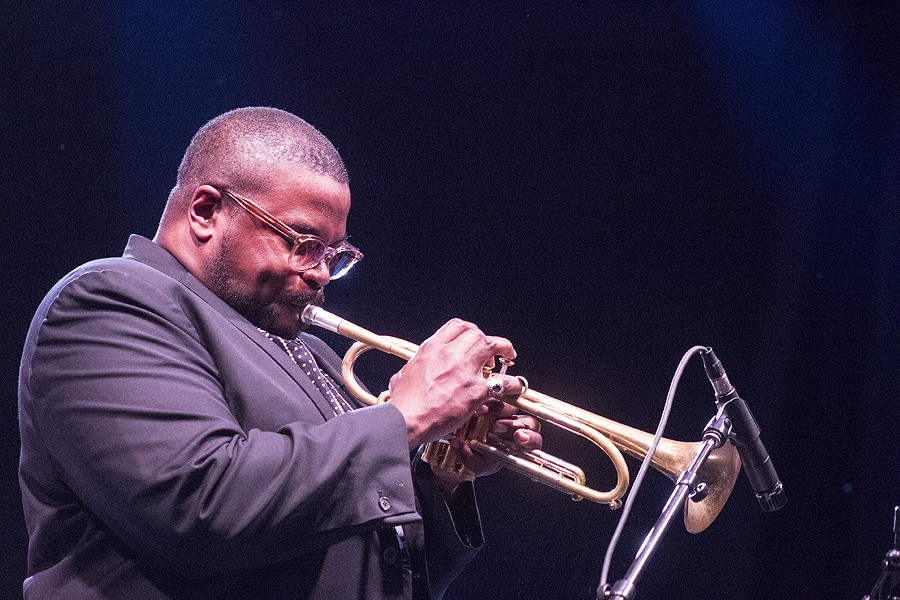 The Jerry Granelli Band with Robben Ford presented a set of easy-going music complete with jazz-shuffle rhythms and blues structures. Interpreting the music of greats such as Charles Mingus, Fats Domino, and Abbey Lincoln and Max Roach, the band exhibited undeniable skill — and yet the arrangements felt almost commonplace. The mostly mid-tempo tunes lacked that energetic spark; that creative lightning-in-a-can that is so invaluable in jazz and blues. There were flashes of it in Ford’s mellifluous guitar licks, but that vitality wasn’t sustained.


With the sun setting, the Miles Electric Band brought crowd-pleasing, funkified jazz to the East Ave. & Chestnut St. stage in tribute to the singular jazz titan Miles Davis. Led by the great trumpeter’s nephew and drummer Vince Wilburn Jr., the seven-piece group — which includes several alumni from Davis’s band — was scintillating from the outset, with a richly layered sound brimming with a somehow unpretentious swagger. It was all about the integrity of the sound, and the band perfectly encapsulated the mood of the hot summer night with seductively smooth musicality. The trumpet lines were majestic, the percussion simmered, and the bass hummed.

My night could not have ended better than with the stunning musicality of Stephane Wrembel at Max of Eastman Place. Having heard Wrembel play on the Jazz Street Stage in the past, I knew I couldn’t go wrong with his tasteful, yet still completely mind-blowing virtuosity. And the man did not disappoint.

With a deeply sonorous tone and classical precision, the sound of Wrembel’s guitar was immediately transportive. Sometimes the destination was a sun-drenched, sprawling valley in Spain, and at other times it was a dimly lit Paris street at nightfall. No matter the locale brought to mind, the magic was undeniable.

Wrembel and his sharp band — guitarist Thor Jensen, upright bassist Ari Folman Cohen, and drummer Nick Anderson — played a set that drew heavily from his “The Django Experiment” series of releases, in homage to the legendary Romani French guitarist Django Reinhardt. Jazz in the Django vein is all about fluidity: the astounding flurries of notes are coaxed into masterful phrases as the inspired melodic arc is gradually revealed. Wrembel and company exemplified this flow with a playful and stylish aesthetic highlighted by ingeniously crafted solos. The visceral yet folksy timbres of two acoustic guitars and one upright bass added gravitas and world-music flair.


A key to Wrembel’s genius is his impeccable intonation, the way he made every pitch — however brief — sing. He didn’t exactly wear his heart anywhere close to his sleeve, but it was clear that his passion for the music ran deep. He never showcased his skill at the expense of the songs, playing with a humility that made his supreme musicianship all the more endearing.

Jensen provided the perfect contrast to Wrembel’s dulcet tones, with a grittier attack and edgier melodies. Their duet in the set closer, “Dark Eyes,” was masterclass in Baroque-style counterpoint, as the two guitarists played off one another with a synchronicity that was uncanny.


With the final day of the 2018 Jazz Festival upon us, Saturday will find me at sets by Abe Nouri at the Jazz St. Stage, Geoffrey Keezer at Hatch Hall, and Eric Krasno Band at Anthology.