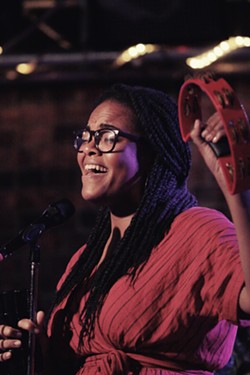 The dampness put a damper on the vibe last night, I'm afraid. Still, those who had umbrellas soldiered on despite the inclemency.

Last night, I started off at Montage to see an artist I knew little of: Liz Vice. Her story is one of triumph over adversity. She was raised by a single mother with four other children,  and health issues plagued her as a young woman. But what you see and what we heard last night was vindicated soul that hasn't lost sight of its roots.

I got the feeling she could've opened up and stretched her legs a bit more, vocally speaking. Her songs weren't at all obtuse; they came from a real place. It's the music that lacked edge for me. I wasn't looking for screaming; I just wanted the music to share its heart as well.

Another little distraction, not all Vice's fault: Her hobo-looking,  hirsute bass player, who stood in front of her with his back to the audience, shaking his ass in clothes that looked slept in.


You can put Davina and the Vagabonds virtually anywhere. The Nuge put 'em in the Big Tent, where I glammed my glims on them during the early show. What a difference a real piano makes. I'd seen the band three times before, all with Davina parked in front of an electric keyboard. But not tonight. She walked and pummeled those elephant teeth like Jerry Lee Lewis in itchy underpants. The brass-centric rest of the band swung low like an elephant's trunk and kept the joy jumpin'. They had me on my feet for Louis Jordan's "Knock Me A Kiss." — a personal favorite in the De Blase household.

Related Davina and The Vagabonds

Rai Thistlethwayte is as fascinating an artist as his name is to pronounce. I caught the late set at Anthology, where — on another real piano — the man coaxed, cajoled, and convinced the crowd to hear it his way, a hybrid of pure pop with a twist of jazz fusion and  indie rock. Thistlethwayte handled the bottom end with an bass octave keyboard like The Doors, while his drummer summoned the thunder below. Thistlethwayte is this generation's Randy Newman, or Ben Folds ... only less nerdy.

Sax-o-Matic and Lake Street Dive is where you'll find me tonight.