June 28, 2018
Drummer Ulysses Owens Jr.’s “Songs of Freedom” was a different kind of American Songbook concert. For this performance, Owens and his band looked no further than a trio of powerhouse singer-songwriters from the 1960’s — Nina Simone, Abbey Lincoln, and Joni Mitchell — to conjure up the sounds of liberation.

But it was the stunning vocal performances from Alicia Olatuja and Theo Bleckmann that made this concert stand out. Olatuja sang with a velvety timbre and crystalline intonation that entranced from the beginning. She was particularly adept at interpreting the songs of Nina Simone; Olatuja’s luxurious voice and charismatic personality were transcendent. The highlight for me was the funky rendition of “Be My Husband,” in which she sang with a soulful snarl that suddenly turned sweetly coquettish, before returning again to defiant swagger.

There is no smoother voice, in any genre, than that of Theo Bleckmann. His otherworldly tone is surpassed only by his extremely versatile range — deep, welling sounds in the lower range and a stratospheric falsetto on the other end.  His interpretation of “There Is a Balm in Gilead” was both comfortingly familiar and unsettling experimental. It was brilliant.


Next up was the funk band Ghost-Note with MonoNeon, playing at Harro East Ballroom. There was a feel-good freshness to the music that was vibrant and uplifting, but the audience was a little slow to warm up to it. Perhaps it was a psychological response to the rainy weather, word of the day’s national headlines, or just the mid-week grind of the festival itself. Whatever the reason, the vibe of the room was oddly subdued, and the crowd — though attentive and appreciative — seemed tepid.

A guest appearance by the gifted blues rock guitarist Ron Artis II, with his dynamic solos and soulful vocals, helped to up the energy. After that, the band’s chunky sax blasts, fuzzed-out bass licks, and the pop-and-sizzle of the drums did the rest of the work. 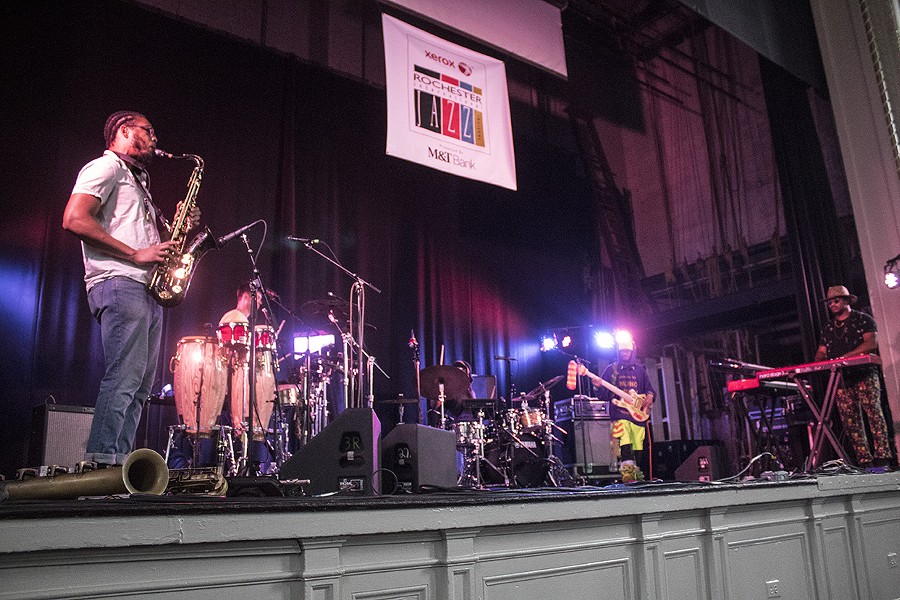 My evening ended at Xerox Auditorium with one of my most highly anticipated performances of the festival. Any band that has two drummers has instantly won me over. But in the case of Austrian-German septet Shake Stew, I was a fan the moment I learned it was Lukas Kranzelbinder’s band. The bassist has already played at the Jazz Festival twice as part of trumpeter Mario Rom’s Interzone. This time, Rom and Kranzelbinder were joined by five new musicians for a set of proggy jazz that was equal parts delightful and challenging. With Kranzelbinder at the helm, I knew the music was going to be fast. But I wasn’t fully prepared for alto saxophonist Clemens Salesny’s full-throated wail or the ephemeral beauty of Johannes Schleiermacher’s tenor sax playing.

The dual drumming attack of Niki Dolp and Andi Haberl was a wonder to behold and, combined with the twin basses of Kranzelbinder and Manuel Mayr, their interlocking rhythms wove a warm fabric of sound in which the horn section was free to explore inventive, hyperactive solos. The energy was manic at times, but the band was never in danger of going off the rails. Fittingly, the show ended in a free-jazz freakout.


For Day 7, I’ll be headed back to Harro East Ballroom to hear The Suffers and Xerox Auditorium to witness GoGo Penguin. A visit to the Lutheran Church for Pilc Moutin Hoenig rounds things out.