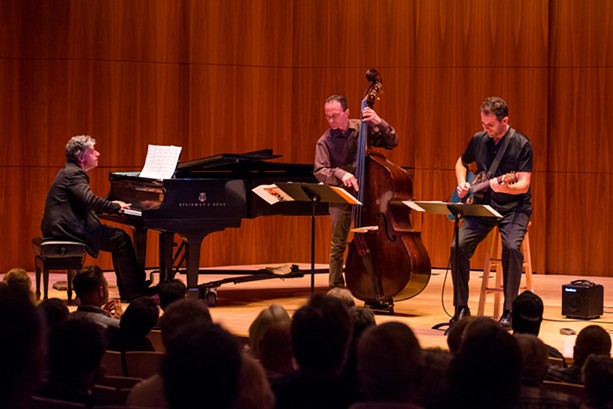 All of the musicianship was superb, but there’s something more to a Joe Locke concert — and not just because he grew up and began his career in Rochester. When he plays, he throws his whole body into it, his four-mallets accelerating to the point where the white ends appear to be a dozen balls bouncing over the bars. When he talks emotionally about his “touchstone” on vibes, Bobby Hutcherson, who died last year, or about Chief Red Cloud, or his own feeling about being separated for a short time from his mother when he was a child, he really feels it. Every tune Locke plays has great meaning to him, and if he looks like he’s becoming one with his music, it’s because he is.

Earlier in the evening at the Lutheran Church, Lucia Cadotsch “Speak Low” was great in a different way. The combination of saxophone, bass, and voice seemed strange, but once the trio got started, it got wonderfully stranger. Otis Sandsjö on sax and Petter Eldh on bass served as a wild, rough, and raunchy texture framing a gorgeous voice. Beauty and the beasts. The two instrumentalists even looked beastly, gyrating toward Cadotsch as she sang. She maintained a stone face throughout.

In her singing Cadotsch had an understated approach, reminiscent of Astrud Gilberto. “Don’t Explain” morphed into the group’s namesake song, “Speak Low.” She sang a moving version of Randy Newman’s “I Think It’s Going To Rain Today” and a rendition of “What’s New,” based on Ahmad Jamal’s 1958 recording, which she called the first hip-hop record. The sax and bass just got better and better, providing insanely dynamic back-up. At one point Sandsjö got into a circular breathing cycle that allowed him to play a melody while maintain his rhythmic pattern.

It’s been a good week for mash-ups at Hatch Hall. On Sunday, Bill Dobbins combined Chopin and Jobim, and Tuesday night Gary Versace merged a jazz standard — "The Way You Look Tonight" — with a Bangles tune, “Eternal Flame.” It was kind of funny the way he and the guitarist kept switching off from the jazz standard to the Bangles tune.

Did I just write the word “guitarist”? In Hatch Hall? Is nothing sacred? Versace played with his trio, Keith Ganz on guitar and Sean Smith, bass. I have to admit, after years of solo piano in Hatch, it was jarring. But it was a fine trio, playing a few originals and a spirited arrangement of another pop tune, “More Today Than Yesterday.”


I’ll start Wednesday night at Hatch Hall where Harold Danko will be at the Steinway. Then I’ll head over to the Lutheran Church to hear Torben Waldorff. I’ll finish the evening with the new singing star Jazzmeia Horn at the Temple Building Theater.