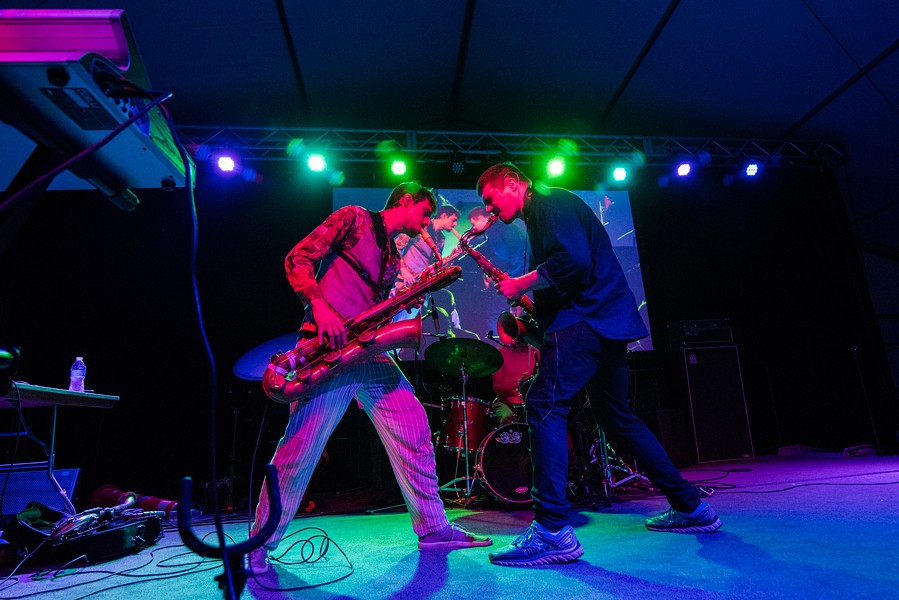 My Sunday night started fittingly on Jazz Street with a performance by local saxophonist Colin Gordon. Gordon was joined by a well-balanced lineup of fellow Rochester musicians: guitarist Chris Potter (fresh from his performance in the Doug Stone Quartet the night before); pianist Max Greenberg; upright bassist Tyrone Allen; and drummer Andrew Tachine, of the rock band Great Red.

The quintet offered the outdoor audience a satisfying set of zesty, straight-ahead jazz, played with plenty of spunk. Starting with a jumpy, tango-infused version of Duke Ellington’s “Caravan,” the show also included odes to Charlie Parker and Béla Bartók. Gordon had a soft touch and a sweet tone, which he demonstrated throughout on both alto and soprano saxes.


From there, things diverged stylistically over at the Harro East Ballroom, where the undefinable California octet The Dustbowl Revival had taken up residence and was playing its second set. The band’s music was the stuff a summer block party is made of: a kaleidoscopic combination of homespun Americana, New Orleans swing, and brassy soul music, with bits of country and rock thrown in. The result was crisp, refreshing, and subtly tart — like a perfect glass of lemonade. And the packed house at Harro East couldn’t stop sippin’.

That’s not surprising considering vocalists Zach Lupetin and Liz Beebe crushed on some of the best vocal harmonies you’ll hear all week, and the group’s sound evokes everyone from Chuck Berry to Squirrel Nut Zippers to The Lumineers. With catchy original tunes like “Honey, I Love You” and “Gonna Fix You” and crowd-pleasing covers like “John the Revelator” and “My Sharona,” The Dustbowl Revival has quickly put itself on my short list of best 2018 Jazz Fest performances…


To which Brooklyn-based trio Moon Hooch promptly responded, “Hold my beer.” Arguably the heaviest band to ever dominate a Rochester Jazz Fest stage, saxophonists Mike Wilbur and Wenzl McGowen and drummer James Muschler make dance club music with jazz instrumentation. During Moon Hooch’s first set in the Rochester Regional Health Big Tent, the only thing missing from the energetic, young crowd amassed in front of the stage was a sea of glow sticks.

What transpired that hour was nothing less than the most musically subversive performance I’ve ever heard at the XRIJF. It was minimalist composer Philip Glass at a rave; it was drum and bass music on smooth-jazz amphetamines; it was the soundtrack to an underground dance party held on an abandoned New York City subway platform.

In other words, if you were at the Moon Hooch show and you weren’t sweatin’ it out, you weren’t doing it right. Muschler kept the groove alive while McGowen and Wilbur unleashed a nonstop aural onslaught of mesmerizing riffs that belied brilliant technical precision and flawlessly expressive intonation. When God said to make a joyful noise, I’d like to think this is what was meant. The ecstatic noise emanating from the stage drew liberally from electronic dance music, hip-hop, and even hardcore.

Day 4 will find me taking in sets by Cold Chocolate, Teagan and the Tweeds, and Zara McFarlane. 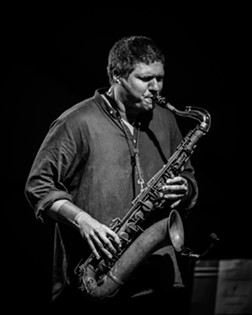 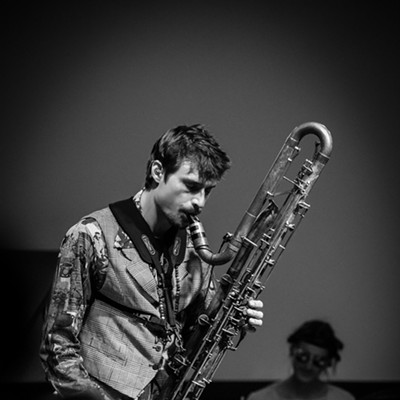 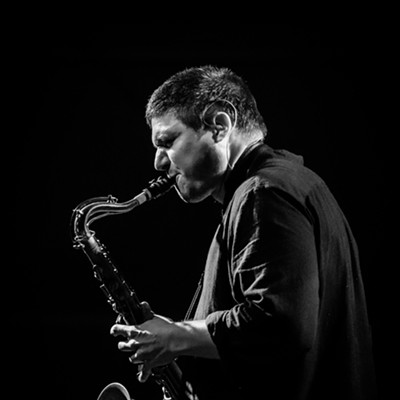