June 24, 2018
Jazz trio The Bad Plus has always excelled at moody jams and compositions that dig heartily into syncopation while flourishes in the piano sweep the listener away blissfully. But with the fairly recent addition of pianist Orrin Evans, taking over for Ethan Iverson, the music is less esoteric. The band is still willing to revel in dissonance, but the overall energy is now more refined and more zen.

On Saturday at the Temple Building Theater, the members of The Bad Plus quickly established themselves as consummate purveyors of cool. Bassist Reid Anderson held things down with roaming lines that were both precise and idiosyncratic. Drummer Dave King emitted swingin’ vibes from behind the kit, interspersed with beefy fills fit for a rock band.

Amid Anderson and King’s intimate musical rapport, Evans played with a sensitive touch, warm tone, and catchy, circular melodic phrasing that often ended where it began — as opposed to Iverson’s more pointed and angular style.

If the Iverson era was like the irreverent but alluring, young rebel, The Bad Plus in the Evans era is like the sophisticated silver fox who’s only improved with age — still brooding, but somehow more suave. The group’s first set of the night prominently featured songs from its latest album “Never Stop II,” including highlights like “Hurricane Birds” and “Safe Passage.” 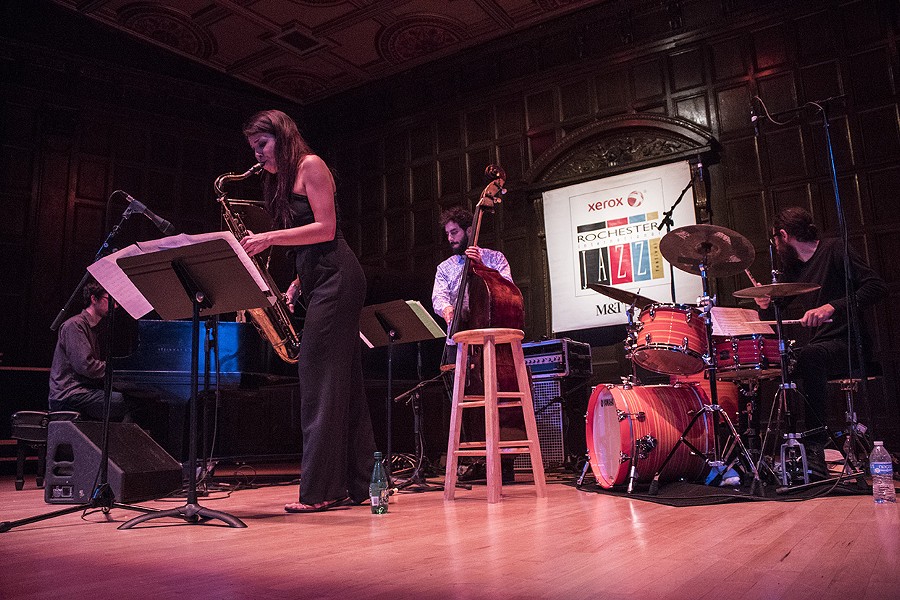 Later on, at Kilbourn Hall, the Melissa Aldana Quartet performed a set of rich and restless jazz. The music was sleek and smooth, but technical enough to wow the aficionados. On tenor sax, Aldana’s playing was impressive, but pianist Micah Thomas’s performance was a bit of a coup. Letting loose a flurry of gorgeous harmonic sequences, Thomas’s contribution seemed to up the antsiness of the arrangements in a good way and stir more creativity among the other players.


But it was another saxophone-led quartet that may go down as the hidden gem of the entire festival. The Doug Stone Quartet, featuring rapper Josiah Williams, popped and sizzled throughout its second set in the Wilder Room. Stone, a School of the Arts teacher here in Rochester, writes music that’s thoughtful and energetic, and he has surrounded himself with talented musicians who know how to realize his vision.

Stone’s longtime friend and bassist John Tate, along with drummer Chase Ellison, kept things churning, while guitarist Chris Potter (also of the indie rock band Oh Manitou) and Stone traded virtuosic solos I hoped would never end. In particular, the song “Confined Within” was dizzying in the best way possible, like a deeply satisfying sugar rush. Stone and Potter ushered in a deluge of vertiginous notes and phrases that were a wonder to behold.

Album review: 'The Early Riser'
By Ron Netsky
Music Reviews
Williams’s vocals were the topper. While his engaging performance was more spoken-word than straightforward rap, the essence of hip-hop as a galvanizing force for social consciousness was more than apparent.

Jazz and hip-hop make for such a synergistic combination, it’s somewhat surprising that more artists haven’t explored the hybrid. In the meantime, you can catch this music at dougstonejazz.com.


For Day 3, I’ve got the music of Colin Gordon, Dustbowl Revival, and Moon Hooch on the docket.