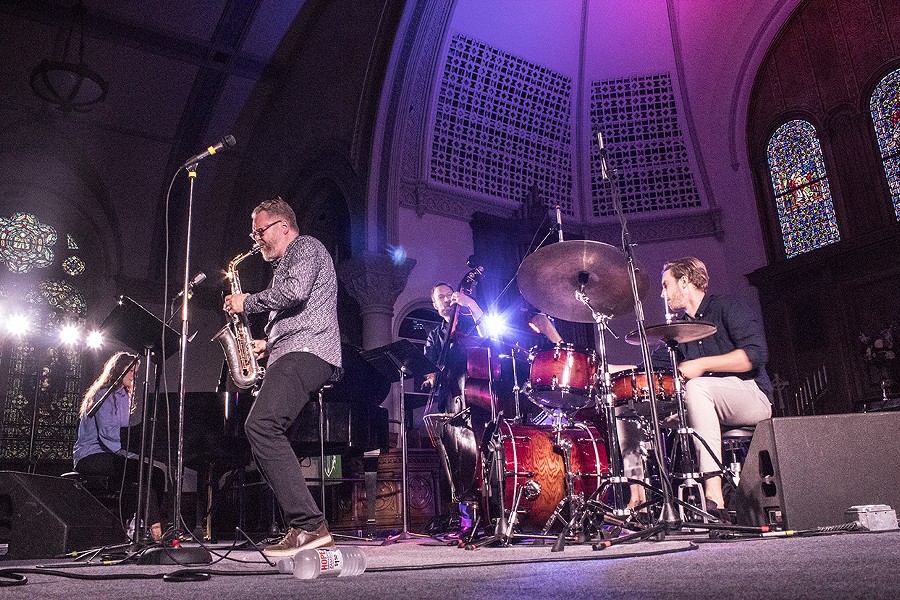 As I’ve gotten to know Scandinavian/European/North Atlantic jazz — as a result of the XRIJF series — I have come to think of it as a musical parallel universe. These players obviously have no direct connection to the American experience let alone the lives of the African-Americans who spawned this great art form. And yet, they love it, they respect it, and they’ve contributed to it.

If there is a Stan Getz in that parallel universe — a saxophonist with gorgeous tone and a melodic style of soloing — it’s Iceland’s Sigurdur Flosason, who played with his excellent quartet Saturday night at the Lutheran Church. Cultural appropriation is a contentious topic and a hot one right now, but it seems to me that artists like Flosason reach across the world with nothing more than a desire to share something wonderful.

In his music, Flosason uses the language of jazz to communicate his feelings about his native land. With titles like “Green Sky,” “Slanted Rain,” and “Black Sand,” his tunes are attempts to capture in music aspects of nature in Iceland. The songs were evocative and he played them beautifully, starting with lyrical melodies before launching off into fantastic solos. One of the last tunes he played, “Serenading The Moon,” created a bridge between his land and American jazz. The title, alluding to his love of nature, is also a line from the great jazz standard “Skylark.”


Earlier in the evening I caught pianist David Hazeltine’s set at Hatch Hall. He began with selections from the Great American Songbook, including “Body And Soul,” “My Ship,” and “In Your Own Sweet Way.” He varied his phrasing in such a dynamic way that, at times, you could practically hear the lyrics coming through.

He later branched out to include a tune that’s not in the standard jazz repertoire, James Taylor’s “Don’t Let Me Be Lonely Tonight.” It may not be jazz, but Hazeltine certainly brought out the song’s blues roots. He ended the set with one of Thelonious Monk’s greatest tunes, “Ask Me Now,” in this case bringing out all of its beautiful quirkiness.


Another superb pianist was featured at Christ Church in Django Bates Beloved Trio. Bates complimented the beauty of the church but also seemed to realize the need to adjust the trio’s sound to its acoustics. “I’m just going to play things I think will work in this room,” he said. With that, the group played the subtle title track from his latest album, “A Study Of Touch.”

Bates sat at the piano to the left of center so that his right hand had an expanded territory to explore. It proceeded to do just that, seeming to glide over the keys, creating a light, shimmering, impressionistic sound. There wasn’t much in the way of concrete melody; it was more like waves of notes crashing to the shore. Bassist Petter Eldh and drummer Peter Bruun were perfectly suited to the music with their subtlety. Bates got a little more bluesy on “Never Ending Strife,” but it was a pretty impressionistic form of blues.


Sunday evening the all-star sextet One For All plays Kilbourn Hall and I’ll be there. Then I’ll catch Rochester pianist Bill Dobbins at Hatch Hall. And I’ll end the night with the three Scandinavian musicians in the Kuara Trio at the Lutheran Church.