February 19, 2018
The F Word. An online column for me to pontificate, ruminate, placate, and salivate. We’ll have reviews and previews, we’ll discuss trends in local and national music scenes, and we’ll try to do it as reverently as possible. Yup. Let’s get started.

When the curtain went up on the Kodak Theater for RAPA’s production of Eddie Money’s Broadway-style musical “Two Tickets To Paradise,” one question popped in my head: Could Money maintain his cool with this endeavor to go from Sin Alley to the Great White Way? Could his backlog of cool endure?

If you remember seeing Ozzy Osbourne on the TV show “Meet The Osbournes” a few years back, you know why I was concerned. Ozzy was exploited and made to look like a doddering old fool — a far cry from the Prince of Darkness personae he had taken years to build up with Black Sabbath. Perhaps Ozzy’s upcoming farewell tour can re-instill some cool that he lost at the hands of Sharon and the kids and a trainwreck obsessed America.

It’s just that sometimes it’s better to let it go. There were rumors that Josh Todd from Buckcherry was being courted for Brian Johnson’s job in AC/DC. Though Todd is an amazing singer, it would have seemed like a desperate attempt to flog a dead horse. Sometimes it’s just time to leave the party, maintain your remaining cool. 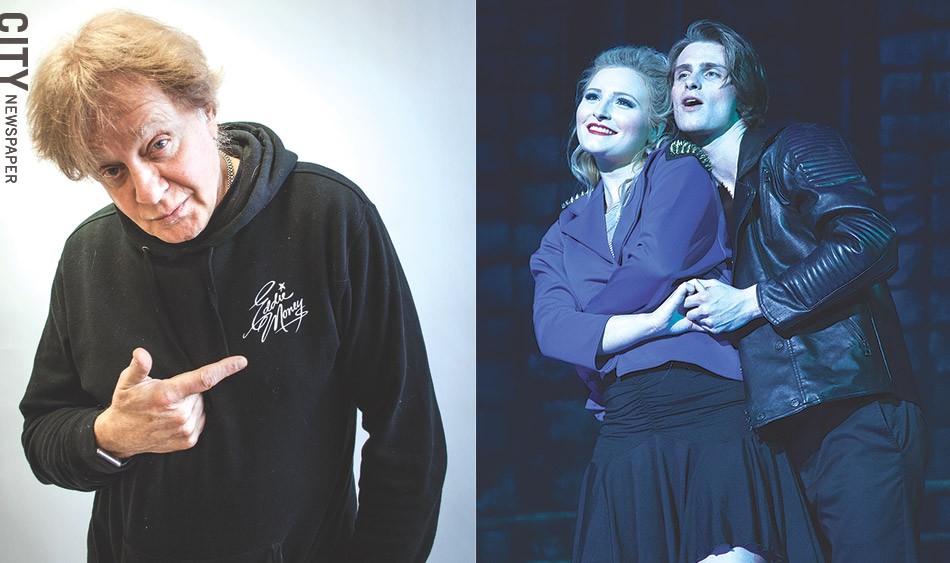 But back to Money and the show I attended Friday night with roughly 800 folks. While it was close to three hours long, the onstage interplay between Money and the actors was great. It was Dickens-esque as the ghosts of rock ‘n’ roll past, present, and future visited the real Eddie Money and helped him tell his tale of stardom.

Rock ‘n’ roll is a young man’s game, but we shouldn’t be forced to have some of our rock royalty put out to pasture. Some still come off relevant, keeping things going as always — Elvis Costello, for example.

In the case of Eddie Money, he felt it was time to diversify his portfolio and write the story of his life as a musical. And as I sat there thoroughly enjoying myself, I searched in my head for the name of someone bold enough to try something like this. I couldn’t think of anyone. Money somehow knew he could do it. He knows the depth and elasticity of his own cool.

It’s harder, I find, to suspend belief in stage productions than movies, but with Money’s spot-on narration, it pulled you into the story. The songs were great, especially the way the show’s music director, Yunjin Audrey Kim, wove melodies and sub-melodies beneath and throughout the story as it unfolded.

Eddie Money looks to recharge his legacy with musical ‘Two Tickets to Paradise’
By Frank De Blase
Music Features
Money was a consummate — and at times funny — host and storyteller, as he framed the story with doses of cool and realism. He didn’t force anything and didn’t seem to be out of place. And I said something earlier about suspending disbelief, remember? Well, there were several scenes so poignant and heartfelt that I fought back tears. The song between Eddie’s mother (played by Dresden Engle), a young Eddie (played by Alec Nevin), and Eddie’s little sisters, Peggy and Kathy Mahoney (played by Natalie Cincotta and Colette Roes), was absolutely beautiful.

Overall it was a fun show that certainly has wings. It was absolutely cool.

After digging the Money man’s cool, I pointed the new blue jalopy toward downtown to score some BBQ at the Dinosaur. As I mowed through a half rack, Mitty and the Followers — with my man Too Tall on the guitar — were mowing through some classic funk, soul, and R&B to a packed dance floor full of remedial movers and money-maker shakers just having a blast. Twas tres cool.

Saturday night, I headed over to The Blossom Road Pub to hear Dave Marbelis as it threatened to remove the lid from this little joint. The sound was big and dangerous, showcasing Marbelis’ talent as a songwriter and as a hook-laden guitar god. Talk about cool.

Check out my story on The Krooks this week, out on Wednesday.  F out.