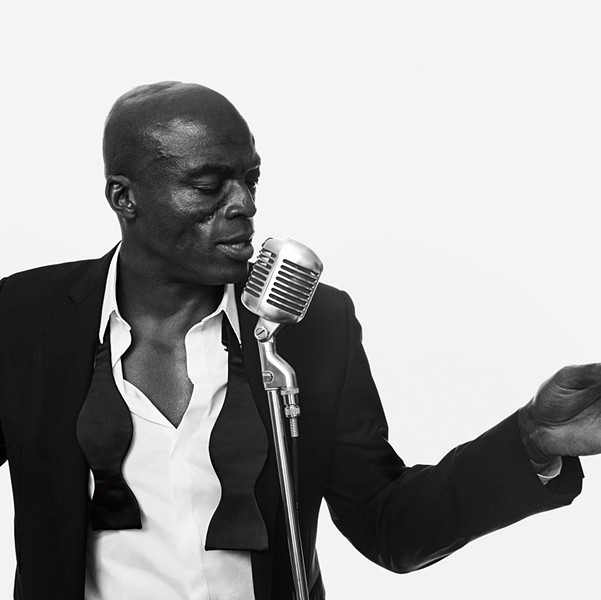 It's the most wonderful time of the year, and no, we aren't talking 'bout Xmas or even Festivus. We mean The Xerox Rochester International Jazz Festival when jazz artists as well as musicians of all stripes descend  upon our fair city for nine days in the summer. Well, the bigwigs at the XRIJF have just announced three of the headliners for the 2018 edition: Seal, Bela Fleck & The Flecktones, and Alison Krauss. The 2018 XRIJF takes place June 22 to June 30 in downtown Rochester. Each headliner show is in Kodak Hall at Eastman Theatre, starting at 8 p.m.

Known for his hit single "A Kiss From a Rose" and his soulful, tenor with a hint of rasp, the British-born singer Seal has earned countless accolades, including four Grammy Awards. He also made history in 1992 at the Brit awards when he walked way with the Best British Male, Best British Video, and Best British Album awards.  Seal in November released an album of jazz and swing standards — cleverly titled "Standards" — which include "Luck Be a Lady," "I Put a Spell on You," and "Love for Sale." Seal plays Friday, June 22. Tickets are $70-$115.

Innovative banjo master Bela Fleck played Kodak Hall as part of the Jazz Fest back in 2011, and sold the joint out. Not necessarily known for it's melodic beauty, the banjo, when in Fleck's hands positively sings and swings.  Fleck was also just at Kodak Hall in February 2016 when he performed his banjo concerto, "The Imposter," with the Eastman Wind Ensemble. Bela Fleck & the Flecktones play Tuesday, June 26. Tickets are $40-$85.

Bluegrass revivalist Alison Krauss warbles sweetly amidst the sweet patter of the genre. This two-time Grammy Nominee has toured with Robert Plant and her own outfit, Union Station. Alison Krauss plays Wednesday, June 27. Tickets are $70-$115.