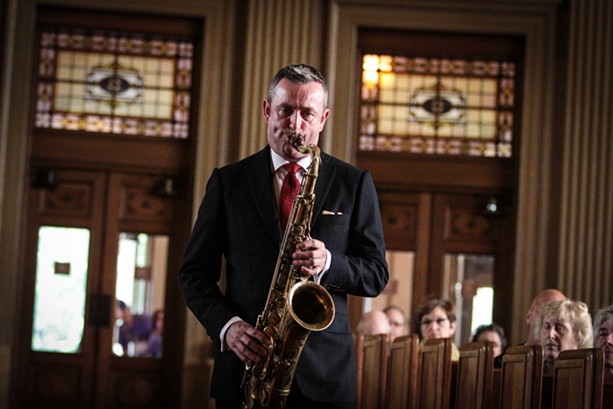 As Tommy Smith slowly strode down the aisle in the Lyric Theatre, I got to thinking how I would describe it. I first thought it took on the look and speed of a wedding march. Nope; that would be too happy for what he was playing on his tenor saxophone. How about a funeral march? Perhaps.

However you look at it, Smith made it to the band stand dramatically while playing something that had a somewhat dark mood within its happy notes. And for a brief instant, I thought he was playing the intro to Tom Waits' "Small Change."

Smith began the show with a piece that was roughly 10 minutes long (maybe even longer) called "Love is a Red, Red Rose." Everything he played floated throughout the room without any amplification whatsoever. It sounded outstanding with its punch, clarity, and sustain. Smith arranged his tunes rather curious and odd. It wasn't your stock call-and-response, modulate, repeat. It was more call, call, call, respond with yet another call.

Smith played it slippery, and the notes escaped like smoke in fog. This is the first time I'd heard him, but I know the next time -- even if he plays the same selections -- I'll hear something entirely different. It was mesmerizing.

Making sure we all had a ball, Marcia Ball threw a ball at the Harro East Ballroom. It was simply good ole rockin' roadhouse music with Ball up front on the piano and leading the charge of her hard-hitting bandmates behind her. Ball's voice was in fine form with just a hint of a sexy rasp and history. The band pumped and pummeled as Ball cracked the whip. And solo breaks allowed the sax player and guitarist to show out and show off what they could do, which pleased the audience to no end. Definitely the most rock 'n' roll show I've heard this week. I had a natural ball.

More on Marcia Ball at facebook.com/marciaballband.

At 77, Mavis Staples still has pipes to be reckoned with. She has that throaty purr that lingers at the tail of every note she sings. With little fanfare, this legend took to the stage with the Staples Singers song "If You're Ready (Come Go With Me)."

Through her 90-minute set, Staples sang tunes by the Talking Heads ("Slippery People"), Buffalo Springfield ("Whatever it's Worth"), and plenty of Staples Singers staples, like "Respect Yourself" and "I'll Take You There." She worked the audience into multiple standing ovations without preaching so much as leading by example on stage, exemplified by the number "Touch a hand, Make a Friend."

You can find Mavis Staples at livinonahighnote.com.

Tomorrow night, it's The Wee Trio in the Wilder Room and Sheryl Crow, who I owe an apology -- I'll explain tomorrow -- at Kodak Hall.