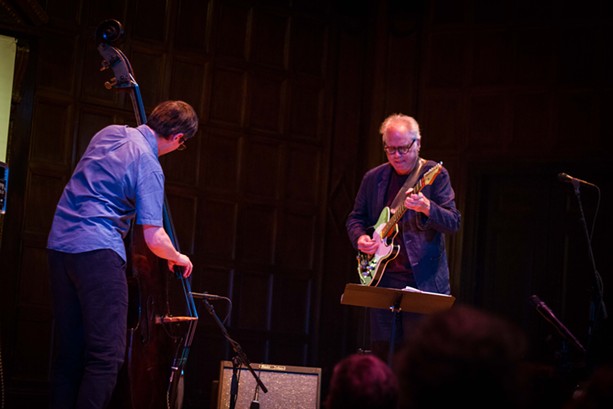 When guitarist Bill Frisell and bassist Thomas Morgan picked up their instruments at Kilbourn Hall Sunday night, they eyed each other playfully. But when they began to play, almost the entire first tune was a sort of musical primordial soup. There were notes and chords and deep bass responses, but they were all in search of a context. The second tune began the same way, but eventually was shaped into Thelonious Monk's "Blue Monk." It was good, but seemed a bit simple for players of this caliber.

Frisell has been to the festival in different configurations five or six times. This was the simplest group -- just guitar and bass -- and although he had a full array of the pedals he uses so skillfully, he only employed them on one tune. Most of the early set was pure electric guitar and double bass. It was evident from the start that Morgan is as much a virtuoso on bass as Frisell is on guitar, but it took them a while to get in the groove.

Some of their best work came late in the set when they played two pop songs: Marty Balin's "Hearts," and Burt Bacharach's "What the World Needs Now."

For more than two decades, I have greatly respected Mark Turner's work on the saxophone. I have also admired the work of Mike Moreno on guitar every time I've heard him. And more recently, I've had a very positive response to Orlando LeFleming's work as a bassist. These three musicians were all side-men in the Jochen Rueckert Quartet at the Lutheran Church. And I should add that Rueckert is an excellent drummer.

So why was I so disappointed in the group's performance Sunday night?

Maybe it was because there was so little energy on the stage. Turner, Moreno, and LeFleming seemed like hired guns, not fully involved in the music. And the music itself seemed lackluster. Call me old-fashioned, but I like the kind of jazz tunes that begin with a head; a tune you can have in the back of your mind that peeks out from time to time through the solos. Rueckert's tunes seemed abstract from start to finish. Some of them were almost morose. It seemed like a waste of these great players (including Rueckert).

I was more impressed by the Adam Kolker Trio at The Little Theatre. Kolker began the set by telling the audience not to be alarmed by the absence of a bassist. He explained that the group had been a quartet when, distracted by being a new dad, the bassist didn't show up for a gig. Kolker, guitarist Steve Cardenas, and drummer Billy Mintz played the gig anyway and liked the sound, so they've kept the group bass-less.

Judging by the sound, that proved to be a great idea. It was refreshing to be able to hear every note of the sax and guitar, every stroke of drumstick or brush. Kolker's trio is a subtle group. In fact, when they kicked off the set with Harry Warren's "I Wish I Knew," it reminded me of John Coltrane's "Ballads" album, just a beautiful melody played with gorgeous tone by great players.

Among the set's highlights were four tunes by Monk: "Four In One," "Epistrophy," "Ask Me Now," and "Evidence." It's appropriate; 2017 is the 100th anniversary year of the birth of the great jazz composer. Kolker and Cardenas played the heads like a horn section in harmony. When they weren't playing excellent solos, they bounced musical ideas off of each other with ease. Mintz wasn't afraid to keep quiet when the tune called for it; he's among the most tasteful drummers I've seen at the festival.

Miguel Zenon is one of my favorite saxophonists; I can't wait to see his group at Kilbourn Monday night. I'll also catch Ikonostasis at the Lutheran Church and Red Hook Soul at Xerox Auditorium.

EDITOR'S NOTE: This article has been updated to correct a reference to drummer Billy Mintz.