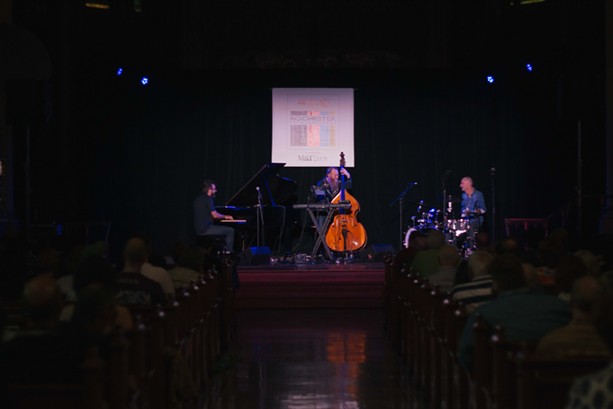 The Neil Cowley Trio doesn't really play jazz. Yes, all the tell-tale instrumentation is there -- piano, upright bass, and drums. But the music itself is more accurately post-jazz: spacious minimalism meets percussive pop piano and driving rock rhythms, resulting in a sound that is alternately introspective and punchy. The British trio delivered on that sound Saturday in a spirited set at Christ Church, the first of two shows the group performed as part of the "Made in the UK" series.

Neil Cowley is decidedly not an ostentatious pianist, eschewing overt virtuosity in favor of contemplative atmospheres and crowded textures. He frequently made way for his rhythm section -- upright bassist Rex Horan and drummer Evan Jenkins -- to carry the music forward with insistent plucking of the bass or the soft propulsion of brushes on drums. Cowley's economical melodies made the music all the more poignant.

On "Governance," big, block piano chords punctuated the air before giving way to sumptuous counterpoint in a quasi-classical style. The piece was a prime example of what seemed to be a cherished value of the trio: space -- the silence between notes. One of the most impressive things about Cowley and company was how comfortable they were in letting the compositions speak for themselves, without resorting to superfluous improvisations or solos that might be forgotten immediately after they were played. 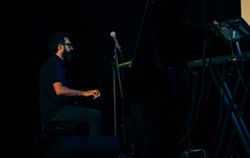 As the set progressed, Cowley gradually revealed more of his piano chops. His melodies became more active and adventurous, and yet they were always perfectly nestled within the pocket provided by Horan and Jenkins. Compositionally, Cowley was frequently closer to minimalist legend Steve Reich and piano rock master Ben Folds -- with the repeated phrases and raucous, drum-heavy grooves, respectively -- than the likes of a Brad Mehldau. "The City and the Stars" was unapologetic and anthemic pop. Anyone in search of "traditional" jazz, by any standard, would likely have gone away disappointed.

I always gravitate to music that hits my ears with an immediacy that is both sweet and unexpected. I definitely felt the pull from the music of Neil Cowley Trio -- hard-hitting and atmospheric, subtle and unrelenting.

Neil Cowley Trio won't be performing again at XRIJF this year, but you can find the band at neilcowleytrio.com.

For a band hailing from Quebec, Durham County Poets can certainly evoke the Deep South, which is exactly what they did during the late set at The Little Theatre. "Grimshaw Road" was a kind of Mississippi blues by way of Canada. Elsewhere, the Poets imbued its song "Monday Morning" with bluesy charm, and "Chasing a Feeling" was a smooth blend of folk and jazz.

Stylistically, the quintet was impossible to box in. What was certain was the warm, "easy listening" vibe of the show. Frontman Kevin Harvey had the crowd in his palm from the outset, peppering in light-hearted stories and silly banter between songs. Harvey's voice had a homey, James Taylor-esque quality, but with a bit of an edge.

Admittedly, while the concert was entirely pleasant, I doubt I'll come away remembering any of Durham County Poets' original tunes. What I will remember, though, is a faithful, heartfelt rendition of The Band's classic song "The Weight."