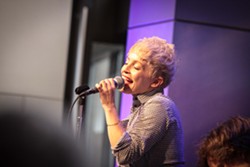 Well, the 16th edition of the Xerox Rochester International Jazz Festival took off its clothes and did a cannonball. The energy in the thick arid air was surprisingly electric; a vibe this strong at Jazz Fests past usually didn't get this feverish so quickly. It must have been the battle for souls raging on two different stages last night ... but first let's take a look at the show I knew we'd all enjoy: a confection of a swingin' band and a swingin' ma'am, Barbra Lica.

It starts and ends with Lica's voice. It's a bright, vibrant contralto one minute, laconic and syrupy the next when she lets a phrase die on the vine and trail off. Lica's songs are little, self-deprecating vignettes about drunken first dates and finding an ex-lover on social media. She peppered her originals with some Duke Ellington ("Just A-Sittin' and A-Rockin'"), some Cole Porter ("Just One of Those Things"), and a version of "A Spoonful of Sugar" -- however, the way Lica pulled it off, light and airy and delivered at hyper speed, earns it the new title of "A Spoonful of Trucker Speed." Her band was tight and a vision of precision. Lica was charming through and through. Her voice was beautiful ... heart-breaking, really.

Barbra Lica will play again Saturday, June 24, at Montage Music Hall. 6 p.m. and 10 p.m. Tickets are $30, or you can use a Club Pass. barbralicamusic.com.

I'm convinced now more than ever that soul wants your soul. Soul music isn't for the betterment of your soul or to lift your spirits high; it wants you to feel it deep in the fissures of your fevered brain all the way down to your naughty parts. Me? Hell, I'm down with it and will go along willingly. I'm the devil in Miss Jones after all. And I witnessed the devil in Miss Stone with 1800 other lost souls in Kodak Hall to see Joss Stone. 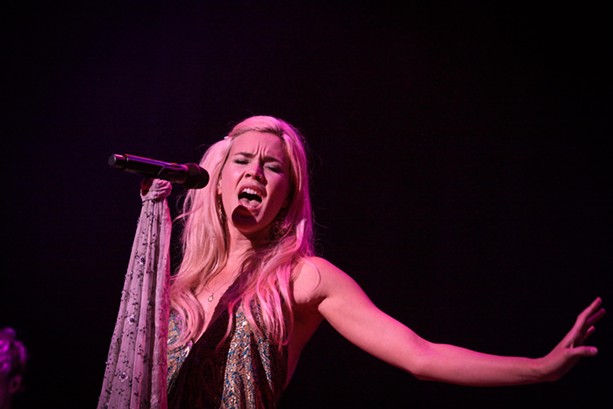 Stone was a lot better than I'd heard in the past. Her voice tends to get a tad brassy when going for those notes way up high in the penthouse suite, but how many singers do you know can hum -- just hum -- a melody? Well, Stone did it early in her set, and she totally unglued me. The barefoot chanteuse had 'em all on their feet by the fourth song. The Burt Bacharach send up was excellent.

While Stone was stealin' our souls gently, St. Paul and The Broken Bones were doing it with heretical splendor and volume on the free East and Chestnut stage. Front man Paul Janeway intoned the opening lines in a chasuble before slinging it aside to reveal a red suit. The band was like a blast furnace with the horns punching and kicking dangerously to counter the non-stop wail of Janeway's howling pipes.

So there you have it, suckers; two ways to sell your soul. God damn us all. See you tomorrow night when I'll be digging on The Quebe Sisters at Harro East and Adam Wakefield at Anthology.