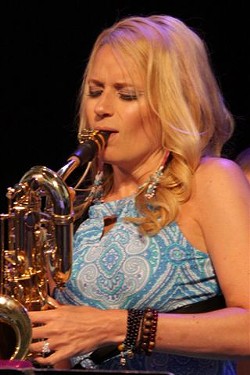 Once I finished playing Monday morning quarterback with the cats at JAZZ 90.1, I crossed the street -- to get to the other side and catch the Lauren Sevian Quartet deliver some hard bop via her baritone saxophone. Miss Sevian stayed mostly in the upper register while ignoring the delicious honks and growls associated with the instrument; if you closed your eyes, you wouldn’t have been able to tell it was a barry.

Dave Rivello’s ensemble played some fairly intricate, multi-layered jazz that kept listeners on their toes. It seemed as soon as you identified with one of the melody lines within a tune, he’d turn around and highlight another one. This went on for the whole set at The Little Theatre. I also witnessed a tuba mute the size of a Volkswagen in use for the first time.

Don’t you just love douchebags all around you with their all too important conversations with their fellow dickheads, prattling on instead of listening to the band. It took Australian pop sensation Rai Thistlethwayte extra effort to shut up the rear portion of Anthology which was lousy with these Chatty Cathys.

For those who did pay attention, we were treated to musical excellence that is the beginning spark of what should prove to be a pop star before long. Armed with an electric keyboard for the left hand and a piano for the right, and joined by a drummer, Thistlethwayte rocked up and down the keyboards with determination and genuine mirth. A little Elton, a little Ben, a lotta cool -- especially when he looped a sort of beat box pattern before scatting over it. It’s a goddamn jazz festival and I haven’t heard any scat until now. And I wanna hear some more. C’mon and try it with me : Ah scooby dooby bay wah wah zup zi.

Skipped the East Avenue fantastic to end my evening with the full bore romance of The Bossa Nova Bradley Brothers. This is one of the city’s best kept secrets ... not for long.