When I entered Kilbourn Hall a bit late for the Nacka Forum concert, saxophonist Jonas Kullhammar was in the middle of a solo. He wasn't playing the sax, though; he was doing a deadpan, funny monologue about his desperation to move to the United States. He said he would have to marry someone, and it didn't matter to him whether the person was male or female, young or old, etc. You probably had to be there, but it went on and on and the audience was laughing hysterically.

The audience also laughed through the Marx Brothers-like antics of this Dada jazz group. Drummer and pianist Kresten Osgood was the most over-the-top in his sarcastic humor, which included making fun of musicians who milk the audience for affection while playing a sappy song. Kullhammar did some of that, too. And when audience members left after a song (as they almost always do at the XRIJF), he screamed, "I love you all so much! Please don't go!"

But there was a serious, avant-garde jazz side to the performance. And when Kullhammar and trumpeter Goran Kajfes went full throttle on a high-energy tune they were as good as it gets. Bassist Johan Berthling and Osgood were also great when the music demanded it.

Kajfes saved the best for last when he put down his trumpet and picked up a seemingly magical instrument, a small, black, crazy sound machine. He lifted it to his lips and created a wondrous array of sound effects, ranging from siren-alarming to birdsong-beautiful. I found out afterwards that it was an electric trumpet (or electric valve instrument) connected to a space echo, an early tape-delay accessory.

Earlier tonight, I caught part of Christine Tobin's set at Christ Church. Tobin was striking for two reasons: she's a great scat singer, and she takes the most unlikely songs and transforms them to jazz. For instance, I never imagined Leonard Cohen's "Famous Blue Raincoat" with jazz harmonies and phrasing, but there it was. The same can be said for the pop song Tobin began her set with: "Who Can I Turn To (When Nobody Needs Me)."

But I enjoyed her most when she indulged in scat singing. She had ample opportunity on a wordless song by her guitarist, Phil Robson. Robson, who played with his trio at the same venue Saturday, provided excellent support as did pianist Leo Genovese.

There's only one thing I'm sure of on for Wednesday night. I will not miss one of my favorite guitarists, Russell Malone, when he plays at Kilbourn Hall. I'll also try to catch pianist Marianne Trudel and her trio with Ingrid Jensen. 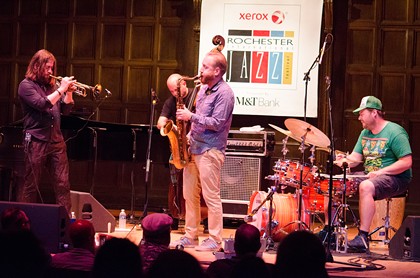