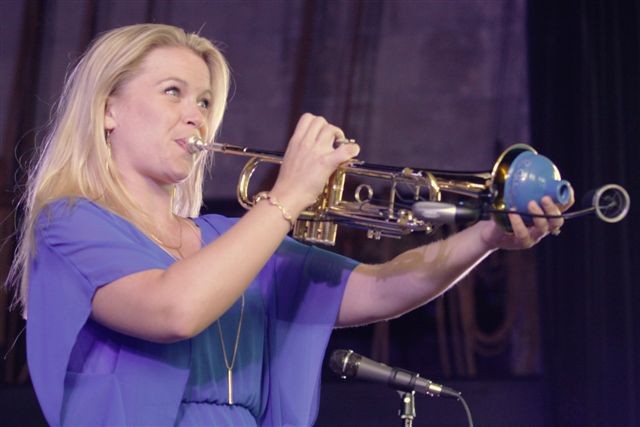 Despite her sunny looks, Bria Skonberg harbors a little darkness. She played around in minor keys, and introduced me to my new favorite tune, Sidney Bechet's "Egyptian Fantasy." The way she worked around its haunting Duke Ellington-esque elegance was tres cool.

I couldn't make up my mind if I liked her horn playing or her singing more. Skonberg's horn was clean with a lot of presence from her perfect armature to the way it lead the charge for her band, especially her clarinet player who snaked around with the trumpet to create a breathtaking New Orleans-rooted spectacle. There were faint hints of Dixieland in the air. Her voice was as fresh and clean as frozen Pepsodent, and some of her lyrics were noir-ish in mood and texture but ultimately up-beat and up-lifting. Skonberg was charming in the extreme. And the packed Harro East Ballroom crowd ate her up.

Bernunzio's is putting up large pictures on its windows to celebrate Rochester's musical icons, and guess what? I'm an Icon. Thanks guys; I'm floored, flummoxed, and humbled. I performed there tonight next to my picture. I was beside myself.

Meanwhile, back at the party, they were jumping for Joy because she wouldn't get off the chandelier...

And meanwhile, back at the Jazz Fest...

I skated over to Xerox Auditorium (it's a bit of a haul) to dig on some Brubeck Blood playing Brubeck. I'm sure his last name opens doors and answers phones, but Dan Brubeck is a killer drummer who I believe I saw play with his dad, Dave, once upon a time. Though it wasn't the old man playing them, it was still a thrill to hear "Blue Rondo a la Turk" played expertly or "Take 5" with its innovative 5/4 time signature played with the guitar playing Paul Desmond's signature part as there was no saxophone or saxophonist to be found.