Lizz Wright had the sold-out Harro East Ballroom crowd in the palm of her hand Monday night. Maybe it was because, with the room's large windows, there is no way to turn the house lights off while it's still light outside. She could see the audience, so Wright engaged with it throughout her show. She said she hadn't played two shows a night since she was in her 20's, and the band's attitude toward the second set was "let's just scrape the bottom and see what's left."

There was a lot left. Wright's voice is gorgeously smoky and her stage movements, gestures, and facial expressions are just right. She performed songs from her recent album, "Freedom & Surrender," and even though they weren't as familiar as her covers, they went over beautifully. Between tunes, Wright spoke about what she was trying to say in the lyrics: the stories mostly involved her upbringing in a strict church atmosphere with her father, a minister.

But it was some of her personality-infused covers that got the biggest responses from the audience. Her renditions of Neil Young's "Old Man" and Gladys Knight's "I've Got to Use My Imagination" (written by Gerry Goffin and Barry Goldberg) were definite crowd pleasers. 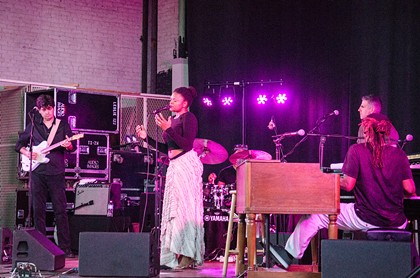 Over at Xerox Auditorium, the 16-piece Moscow Jazz Orchestra walked onto the stage wearing suits with red, white, and blue-striped ties. But that was nothing compared to the obvious immersion of the group's members in American jazz. Vladimir Putin may be doing some saber rattling, and a new Cold War may be on the horizon, but the Moscow Jazz Orchestra is as American as apple pie.

The Orchestra is led by Igor Butman (who plays with his quartet Tuesday, 6 p.m. and 10 p.m., at Montage) and he was every bit the showman. Like Benny Goodman or a leader from the classic big band era, Butman would rise from the reed section and wind his serpentine saxophone solos over and around the sound of the whole band. But that's not to say the group was retro in any way. The music ranged from a composition based on a Russian folk song to an arrangement of Billy Strayhorn's "The Intimacy of the Blues" -- the treatments were all contemporary.

Despite all of the fireworks on stages all around downtown Rochester, there is a place for subtlety at the XRIJF. Mika Pohjola's trio provided some of that Monday night at the Lutheran Church. When the trio's saxophonist took a solo, sometimes the drummer would drop out completely. And when the drummer soloed there were no pyrotechnics, just an exploration of the tune's percussive possibilities.

A superb pianist, Pohjola played some of his own tunes, including "Sleep," based on a poem by a famous Finnish writer. The trio ended the set with Ornette Coleman's 'Humpty Dumpty," and even that was not enough to stir things up.

Tuesday night, I'll be checking out Christine Tobin at Christ Church. Then I'll head over to Kilbourn Hall to hear Nacka Forum.