Just about every pianist I've seen at Hatch Hall over the years has been excellent, but Eldar is in a class by himself. He's the Vladimir Horowitz of jazz, or for the younger generation, let's say Lang Lang. The point is, Eldar is one of the world's greatest pianists -- and we had him all to ourselves tonight.

Eldar, whose last name is Djangirov, was recognized as a prodigy when he moved from the former Soviet Union to Kansas at 10 years old. In his teenage years, he was talked about with the same sense of awe that Joey Alexander now enjoys. Now 29, he has developed into an absolutely thrilling performer.

He started his set with a frenzied rendition of "A Night in Tunisia," in which snippets of melody would float over his impressionistic foundation. (Eldar revisited this mode of improvisation throughout the set.) He began The Beatles tune "Blackbird" more like a woodpecker, pecking at one note repeatedly while building up the chords and melody around it. And he actually slowed down for a while on "Willow Weep for Me," but it didn't last for long as his right hand took off on another flight.

Eldar played other standards, like "Take the A Train" and a player-piano-inspired version of "Body And Soul," but my favorite moment was when he took on a Bach prelude, but not without providing his own wildly imaginative variations. 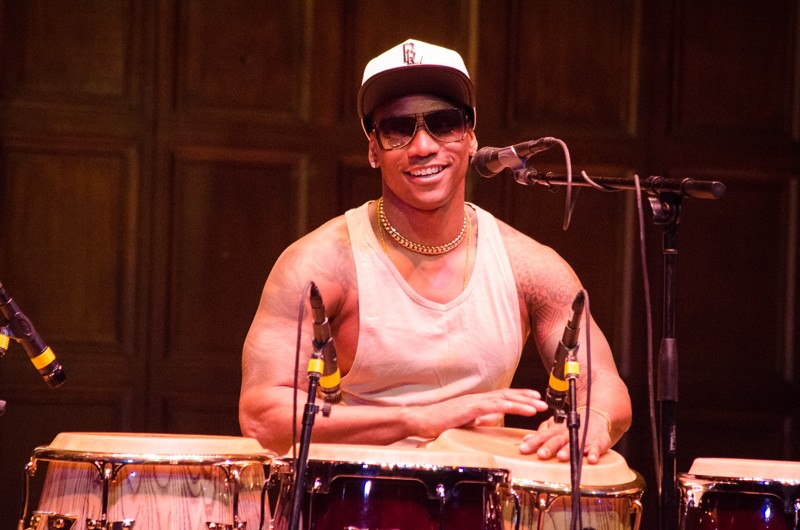 The three other musicians in Pedrito Martinez's quartet at Kilbourn Hall waited until the second to last tune to leave the stage and let Martinez demonstrate why he is regarded as one of the hottest Afro-Cuban percussionists working today. With four conga drums in front of him, Martinez filled the hall with wave after wave of complex polyrhythms.

Throughout the set, he had shown his prowess as an expressive singer who got his songs across despite the language barrier -- although attempts to involve the audience in singing part of a tune didn't quite work. The songs were infectious and the group often used four-voice harmonies.

But Martinez's quartet played one of the loudest sets I've ever heard in Kilbourn. The group obviously wanted it that way, complimenting the soundman and even giving him a shout out. I controlled the volume with the earplugs I always have with me, but the audience didn't seem disturbed by it.

At the Lutheran Church, bassist Arild Andersen began his trio's set with bowing in the higher register of his double bass. He was playing into electronic devices that would form harmonies and counterpoint as he layered his choruses, and he eventually began to pluck and strum, building to a ferocious solo. Anderson was eventually joined by drummer Paolo Vinaccia and tenor saxophonist Tommy Smith -- each equally experimental.

Smith, a long-time collaborator with Anderson, played with more of an adventurous edge than he did in his straight-ahead Kilbourn Hall set Saturday night in a duo with Makoto Ozone. This trio went on to explore the more avant-garde side of jazz that seems to have found more of a home in Europe than it has in the United States.

Monday night, I hope to catch Lizz Wright's set at Harro East. Then I'll take in the Moscow Jazz Orchestra at Xerox Auditorium, and end the night with Mika Pohjola at the Lutheran Church.