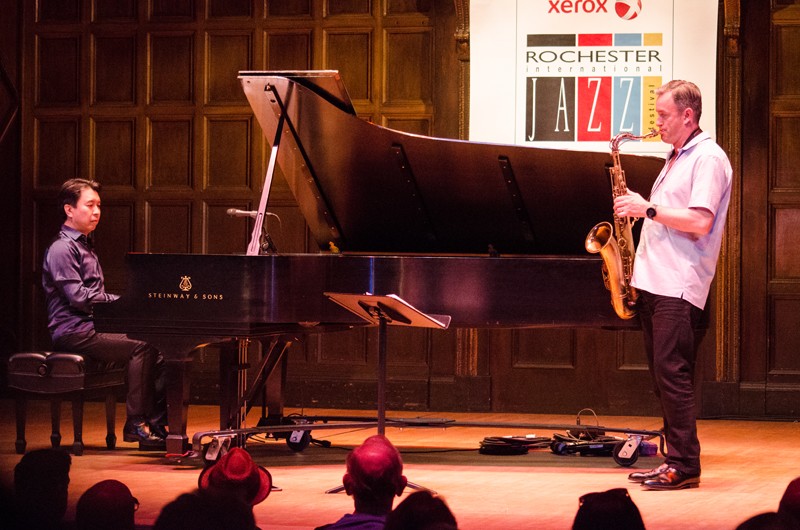 About three-quarters of the way through their energetic set at Kilbourn Hall, Tommy Smith aimed his tenor saxophone right into the open lid of Makoto Ozone's grand piano. The sounds that came out for the next several minutes were magical.

Smith, who had a gorgeous tone and a voluminous dynamic range, played clusters of notes that did far more than create compelling melodies. Each phrase he played also added up to a chord that would gradually build in the piano's improvised echo chamber and resonate for five seconds or so -- enough time for Smith to begin to create the next note cluster. After the piece, much of the audience gave a rare mid-set standing ovation.

Each member of the duo had referred to the other as a genius during the show, which is kind of a dangerous thing to do; at the very least it sets a high standard. But with Ozone's dexterity and adventurous exploration at the piano and Smith's ability to shape his saxophone's sound from low register growls to beautifully controlled high squeaks, it was hard to argue with either of them.

I always sit on the left side at Hatch Recital Hall so I can see the hands of the pianist as they roam over the keyboard. Music is often both a visual and aural experience and Jon Ballantyne's hands did not disappoint. While his left hand held down the fort, maintaining complicated bass lines, his right broke free, spidering frenetically over the keys. As free as it seemed, there was never a hint of a note gone astray; Ballantyne was in complete control.

His playing was so strong and his set so varied, the hour went by quickly. On a medley of "Monk's Mood" and "Round Midnight," two classics by the great Thelonious Monk, Ballantyne not only traversed Monk's quirky melodies wonderfully, he filled many of the spaces in between the lines with his own quirky runs and flourishes.

Over at Christ Church, transplanted British guitarist Phil Robson (he spoke of his recent move to Weehawken, New Jersey) filled the sanctuary with a languid, upper-register sound reminiscent of Pat Metheny. Robson played mostly original compositions, giving the audience little to hang on to, and sadly, most of the crowd left before he got around to a standard, "You Stepped Out of a Dream."

Robson and his excellent band mates, bassist Joseph Lepore and drummer Tom Rainey, had some strong interplay, especially when Rainey took a wild solo using some sort of miniature drumsticks.

Sunday night, I'll be starting off with Pedrito Martinez in Kilbourn Hall before heading over to Eldar in Hatch Hall, and finish with Arild Andersen at the Lutheran Church. (That was not a bad pun, he's Norwegian.)