I said it was all about Junior Brown, and that's precisely how things rolled out for day two of the Jazz Fest. Weather-wise it was the kind of conditions that weathermen take credit for. And inside, it threatened to get hot since the buzz was buzzin' for Nashville's super-afroed lady at the keys, Kandace Springs.

As Springs dug into some Coltrane and a little Peterson, along with some of her own designs, she was charming to the max. And she possesses quite a range, which got sultrier the closer she dove into alto territory. But all of this and I just couldn't connect with her.

Springs was sincere and authentic, but her material was too all over the place; there just wasn't a root or thread through the set. She showed the packed Harro East Ballroom (which had simply amazing sound pumping out of the mains, by the way) what she likes -- I would rather see and hear more of who she is next time.

Erykah Badu took a wrong turn at Albuquerque and was late by a couple hours, and I sure as hell wasn't going to miss Junior Brown at Anthology. So I forwent Badu and got down with Brown.

After meeting the man backstage and pressing the flesh, I settled in to an amazing show full of deceptively simple rhythm and time signature shifts by Brown and his able band. I don't know which half I like hearing from more: the guitar or the steel guitar. Both are part of his double-necked Guit-Steel -- the instrument equivalent to conjoined twins.

Brown switched off between the two liberally, with some string bending hi-jinx, and played with the low string tuner peg so it would plunge multiple octaves that almost came close to his beautiful baritone. Speaking of his voice: the ghost of Ernest Tubb lives there.

It'll be Charles Ruggerio, The Majestics, and John Abercrombie tomorrow night, along with lots of people watching. 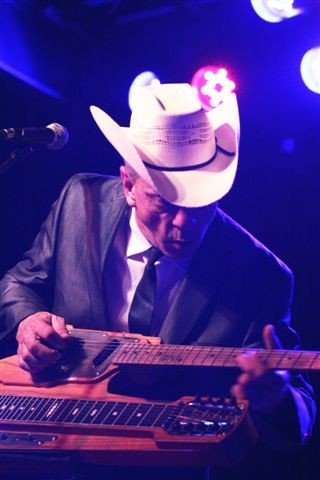