He had played at the XRIJF twice before, so I wasn’t sure what the “New” in Kurt Rosenwinkel New Quartet was about, but it didn’t take long to find out at Kilbourn Hall Friday night. I knew he had used a small lapel microphone to vocalize with his guitar for years, but Friday he had a small head-set mic and used it a lot during his solos. The guitarist best known for wordlessly singing along with his guitar is George Benson; Rosenwinkel’s approach is entirely different. Unlike Benson, his voice is not out front. Instead, it provides a subtle enhancement, changing the texture of his guitar solos.

Another new aspect of Rosenwinkel’s performance (at least to me) was a more audience-friendly approach. He actually spoke a bit (not much talk the last two times) and even his repertoire seemed easier to penetrate. The first tune he played, “Cycle 5,” was downright catchy. And, during a beautiful ballad by pianist Aaron Parks, Rosenwinkel (one of the fastest guitarists anywhere) slowed down and played a gorgeous melody.

The performance turned out to be two for one in a way. I had forgotten that the superb pianist, Parks, was in Rosenwinkel’s band. Parks is worthy of a show of his own (and had one at the festival a few years ago). He was featured in long solos on several tunes and never disappointed. Eric Revis (bass) and Allan Mednard (drums) were also excellent.

Saxophonist Denys Baptiste and his group Triumvirate (Larry Bartley on bass and Moses Boyd on drums) seemed to have a novel idea at Christ Church. Baptiste, who had a great rapport with the audience, said they would play one long piece with snatches of the music he’d heard growing up, mainly from the 1960’s, although he was born in 1969. I thought that sounded terrific; the great pop music of the 1960’s would lend itself nicely to a stream-of-conscious jazz treatment. 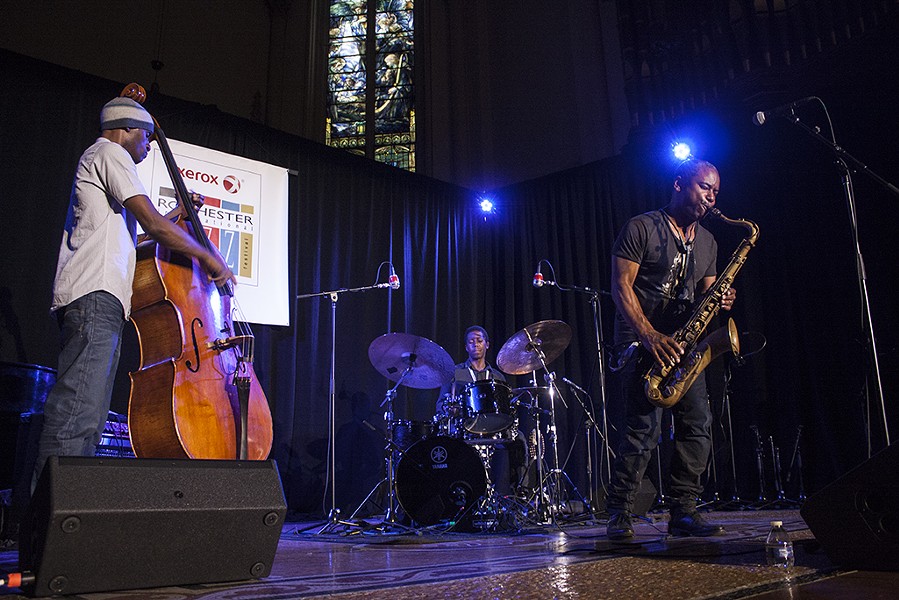 The thing is, I didn’t hear any music from the 1960's. And I know that music. I was there. In fact, I still attribute my failing of several high school Trigonometry tests to the fact that I had too many lyrics of 1960’s songs swimming around in my head to make room for sines and cosines and tangents.

What I did recognize was Paul McCarney’s “My Love,” especially the repeated line “My love does it good.” But that was from the 1970’s, from Sir Paul’s insipid period. And then, toward the end, he got caught up in Cindy Lauper’s “Time After Time.” Not a bad tune, but from the 1980’s.

That said, the group was really good, with enviable simpatico. Despite the fact that they were improvising the entire set, they stuck together beautifully. Boyd was especially good at not over-drumming. He obviously was sensitive to the acoustics of the church. This concert sounded great.

I was glad that Melissa Aldana (& Crash Trio) asked the audience if we wanted to hear one more song at the end of her show at the Little Theatre because the group’s final tune, “Back Home,” was its best. It was, she explained, dedicated to Sonny Rollins, whose music inspired her to put down her alto saxophone and pick up a tenor. The tune related to Rollins in more ways than one. Musically, it recalled his syncopated melodic style and, like her, Rollins sometimes played in a piano-less trio.

A piano-less trio is a bold move, putting a great deal of emphasis on the saxophonist (although bassist Pablo Menares and drummer Jochen Rueckert were excellent). Aldana mostly rose to the occasion but the set got a bit bogged down by tunes that sounded similar in terms of rhythm and tone.

It was refreshing to hear the one cover she played, Duke Ellington’s “I Got It Bad And That Ain’t Good,” and she played it beautifully. And, toward the end of the set, it was good to hear Rueckert (who had been pretty subdued) come alive with some hot percussion. A few more tunes like that wouldn’t have hurt.

I’ll start the last night of the festival at Kilbourn Hall with trombonist Clifton Anderson and his Quintet. Then it’s on to Hatch Hall where pianist and singer Champian Fulton will be playing. And finally I’ll head for Xerox Auditorium for Canadian Christine Jensen’s Jazz Orchestra featuring her sister, Ingrid Jensen, on trumpet.