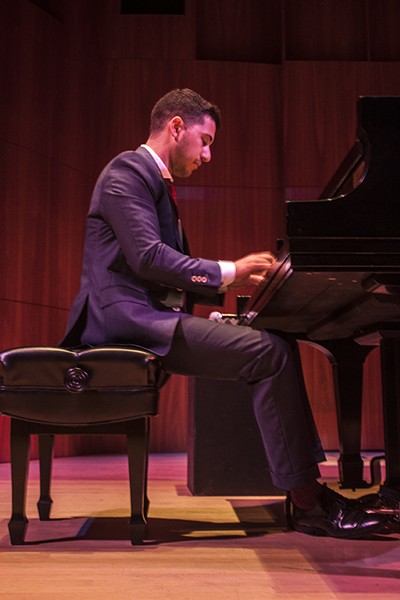 Before New York City-based pianist Emmet Cohen began playing his second set at Hatch Recital Hall on Friday night, he let the audience know it was going to be "loose." "It's jazz -- if you wanna scream, comment, say 'boo,' whatever."

Those present elected to stay quiet and attentive for most of the set, erupting into cheers and applause only after each selection was finished. The performance was certainly worthy of such a response. Cohen played with a striking and effusive elegance. He moved all over the keyboard with understated, self-assured flair.

His arrangements were completely uncluttered, allowing the melody and bass to take precedence. The relationship between the two elements is where the true beauty of the songs resided. Cohen's playing was often jaunty and whimsical rhythmically, breathing a lighthearted air into the proceedings.

The pianist's set wasn't perfect, however. When playing the upper reaches of his instrument, there were times in which Cohen was unable to articulate all of his ideas. Stray notes were inexact, and certain phrases required a stronger touch in order to be made fully audible.

But these infrequent sins of omission were trumped by Cohen's consummate charm, as well as his remarkable knack for shaping melodies with a smooth touch, connected phrasing, and a keen ear for what creates a compelling narrative arc.

Whether interpreting the music of Benny Golson, JuleStyne, Horace Silver, Cole Porter, or Billy Strayhorn, Cohen plays music meant to be heard in the witching hour, in which magic is conjured and love is made.

During Cohen's original composition "You Already Know," which was written only a few months prior to this performance, his signature jauntiness returned to interrupt moments of more somber balladry. And yet there were spurts of youthful, impetuous violence too, which soon found their way back to Cohen's distinct style of clever tunefulness.

The pianist ended the set with a powerhouse sequence of Fats Waller's "Jitterbug Waltz," "Wail" by Bud Powell, and an especially hyperactive version of George Gershwin's "I Got Rhythm." Cohen is a young musician to watch for years to come.

Some voices were meant to meld -- that's the guiding principle behind the vocal jazz trio Duchess. The group opened its second set at Max of Eastman Place with a sweet-sounding, if rather patronizing, song equivalent to former Buffalo Bills head coach Marv Levy's mantra "Where would you rather be than right here, right now?" but quickly settled into bubbly, close-knit harmonies on tunes such as the Doris Day classic “Que Será, Será" and "Three Little Sisters" by The Andrews Sisters, and The Boswell Sisters' "Heebie Jeebies."

The members of Duchess -- Hilary Gardner, Amy Cervini, and Melissa Stylianou -- are perfectly competent singers on their own, but in harmony their voices gain special resonance. While Duchess;' brand of 1930's and 40's-style vocal swing tunes is a total throwback, there's nothing gimmicky about the songs or the performances. The trio sang earnestly, but with a clear commitment to fun. If you like your jazz old-school, the music of Duchess might be just what you're looking for.