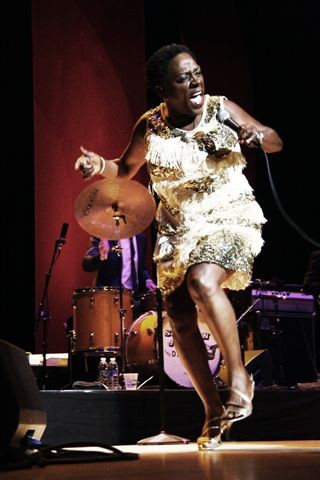 There will be no pictures this evening of Doyle Bramhall II because the cat played in the shadows with no spotlight. Regardless, he sounded great. He was the second loud guitar player on stage in a poncho this week which added to his good, bad, and ugly guitar-slinger mystique. His guitar was an intense, psychedelic grumble and scream. It sonically mimicked Hendrix's "Star Spangled Banner" in spots along with The MC-5 at the Democratic National Convention. He conjured this apocalyptic thunder by playing with a phase shifter and tremolo left on for the entire set. It was rather ferocious, dense, and vicious and did most of the talking as Bramhall was a man of few words, opting to focus his attention on the task at hand: taming the dinosaur in his amps.

Still surfing on that R&B high that Sonny Knight and the Lakers put me on, I was ripe and ready for Sharon Jones and The Dap Kings. It was an amazing show with The Dap Kings laying down a solid groove as Jones bounced around the stage like a pinball. Things almost got out of hand during the band's send-up to Gladys Knight when Jones suggested a few females join her which got interpreted as "All the ladies make for the stage." Her voice was raw emotion with purpose. She shared about her cancer scare which made the jubilee on stage that more poignant as she danced a non-stop celebratory tantrum to the delight of the packed house.

Tedeschi Trucks Band had the unenviable task of takin' to the stage after Jones and the Kings leveled it. I've never been one for huge bands (except for big band); there doesn't seem to be enough room for air between the notes. In this case I was wrong. What struck me most was Derek Trucks' slide guitar as it slithered around everything else on stage. It was positively magical as he brought it from a whisper to a scream. It was mesmerizing.