When the nearly 30-year-old trumpeter Theo Croker took the stage at Kilbourn Hall on Thursday night, he did so with a group of young professionals both exceedingly vibrant and undeniably mature. It's hard to imagine five musicians more dialed into one another than Croker and his band -- keyboardist Michael King, tenor saxophonist Anthony Ware, bassist Eric Wheeler, and drummer Kassa Overall.

With regard to phrasing, the chemistry was unparalleled, each instrumentalist intuitively vibing off the others. Collectively, the group's approach to dynamics was superb, and the subtle, sophisticated rhythmic changes demonstrated the highest levels of musical cohesion. Arrangements never became too busy, and solos were delivered with sparkling clarity. 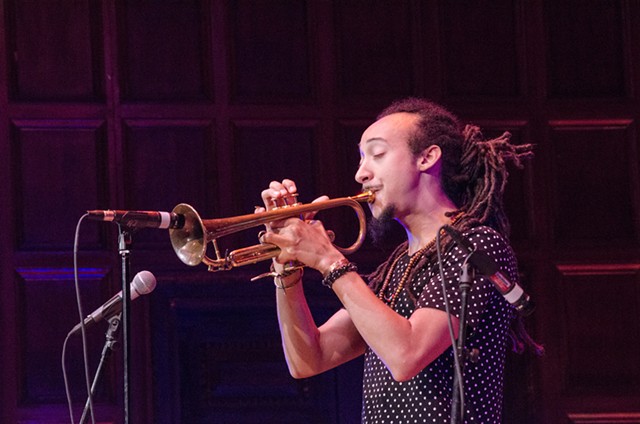 Croker boasts a beautiful legato tone, and his ability to make many phrases sound as one fluid thought is the sign of a truly masterful musician. His trumpet radiated cool -- an ideal balance of detachment and care, passion, and nonchalance. The variety of timbres that Croker coaxed from his instrument was kaleidoscopic: rounded, flutter low notes; otherworldly cries in the upper register; muted drones with strange, deep overtones; searing, non-tonal sounds. All required a rare mix of control and innovation with regard to embouchure that one only achieves through serious study and countless hours of exploration.

On the song "Bo Masekela," Croker made ingenious use of the wah pedal during a slow funk groove, prompting me to wonder how I had never heard the effect used with a brass instrument before.

All in all, Croker and his band may have been the most polished ensemble I witnessed all week. The music they played was exceedingly articulate and engrossing. Croker's compositions are made of the stuff you'll want to return to again and again.

The country-bluegrass outfit Mama Corn succeeded in sounding relaxed without sacrificing energy in its performance. While the songs themselves may not have been the most memorable, the lovely vocal harmonies used by the group at every turn were supremely listenable, rich, smoky, and smooth. In fact, every song seemed to build with anticipation toward the blessed moment in which the harmonies kicked in.

It should be noted that Mama Corn, though usually a five-piece, performed as a quartet during its performances at The Little Theatre. And yet the music wasn't lacking in texture or development. In addition to the overall competency of the musicians, their rapport with one another was obvious and entertaining, as the between-song banter reflected an easy camaraderie. One got the sense that the band members loved each other's musical company so much that they would have been just as at home playing for one another as they were for the appreciative jazz festival audience.

It was also nice to hear Americana music outside of the Squeezers venue on the second floor of the Sibley Building on Main Street, where it would have been easy for festival organizers to relegate such music for the entire nine days. It was comforting that one could wind up hearing music of virtually any style regardless of the venue. I believe this kind of accessibility can only help listeners to find even more artists with whom they may have been unfamiliar.